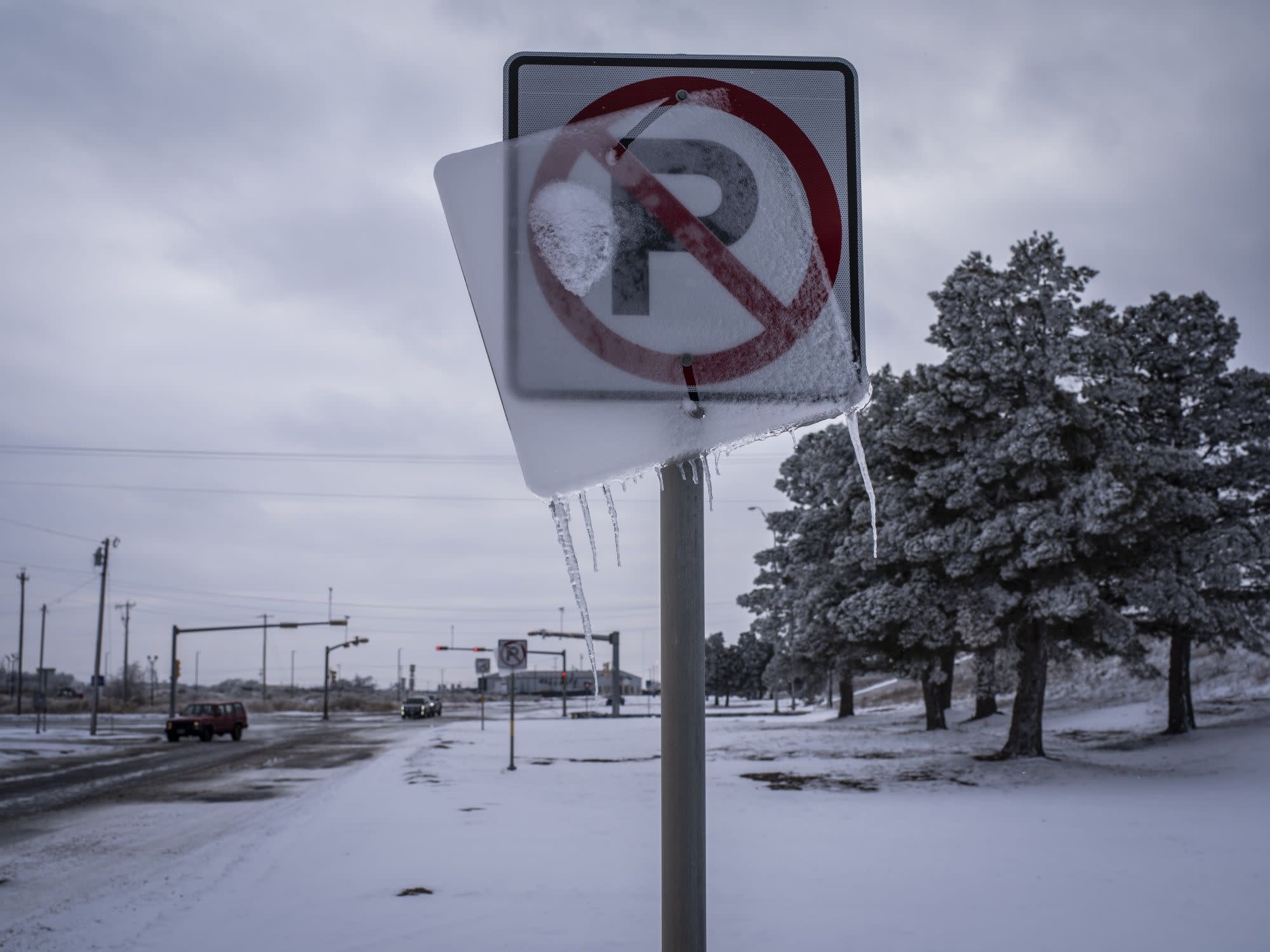 Freeze Could Keep Texans in the Dark for Days: Energy Update

(Bloomberg) — The deep freeze that has forced the shutdown of U.S. refineries, oil wells and meat plants, disrupted shipments of soybeans and corn, and is still leaving more than 3 million customers without electricity could continue to keep parts of Texas in the dark for several days.

To prevent the collapse of their networks, suppliers from North Dakota to Texas implemented rolling power cuts for a second consecutive day. The operator of the Texas electric grid no longer expects all service to be restored in the state by Tuesday night, saying it could take days for enough power plants to be up and running. Utility CenterPoint Energy Inc. also warned residents blackouts may last for several more days

In the Permian Basin, major producer Occidental Petroleum Corp. told customers it would be forced to curtail oil deliveries, while Chevron Corp. shut in some wells in the region. Fracking in the top U.S. shale plays has gone dark. U.S. oil production has plunged by a third.

Authorities warned Houston-area residents to stay off the roads and highways after sunset on Tuesday amid expectations that plunging temperatures and an approaching ice storm would make driving dangerous. Long lines formed at grocery stores in scenes reminiscent of the early days of Covid-19 as residents stocked up on necessities. Hotels in the area suspended some meal service because of delayed deliveries, and vacancy rates were near zero.

All time stamps are EST.

Water-pressure levels in some municipal systems west and south of the fourth-largest U.S. city have fallen so low that the water is no longer safe for human consumption, according to warnings from multiple districts late Tuesday.

The boil orders came just hours after office towers in the downtown business district warned tenants that low pressure meant the water was no longer potable. Power supplies across the state have been crippled by a combination of record cold temperatures and disruptions in fuel deliveries. Water utilities in Texas rely on electric pumps to operate distribution networks.

The Freeport liquefied natural gas export plant in Texas has delayed and canceled planned loading of several shipments over the next few weeks as the facility curbs output in response to the deep freeze. Texas Governor Greg Abbott asked the three-train plant to dial back operations in keeping with the state’s disaster declaration.

Power disruptions at export facilities, closed ship channels and a reduction in the flow of natural gas have held back LNG tankers off the coasts of Texas and Louisiana. Crews are working to restore power to the Sempra Energy-owned Cameron LNG export terminal in Louisiana. Houston-based Cheniere Energy Inc., the top U.S. LNG exporter, also curbed production at Sabine Pass LNG in Louisiana and Corpus Christi LNG in Texas.

Gas flows to U.S. LNG export facilities have dropped to the lowest level since early-September, according to data from BloombergNEF.

The Midcontinent Independent System Operator Inc., which runs the largest power grid in the U.S. Midwest, called for rolling blackouts across its entire southern region amid generation outages and high demand. The order is scheduled until 1 a.m. on Feb. 17.

MISO operates a system that stretches along the Mississippi River region from the Canadian border to the Gulf of Mexico, taking in 15 U.S. states and the Canadian province of Manitoba.

Rolling blackouts that have paralyzed Houston and the rest of Texas may last for several more days, utility CenterPoint Energy Inc. warned residents.

With too little electricity being generated to supply all demand in the fourth-largest U.S. city, CenterPoint said in a tweet that it has no way to predict when supplies will be restored.

A deep freeze that’s sent Texas power prices surging and curtailed millions of barrels of oil production is serving as a short-term boon for Canada, which is fetching a rare premium for its natural gas.

The country’s benchmark AECO gas price traded at a 27% premium to its U.S. equivalent on Tuesday, just days after touching a 7-year high of $5.28 per million British thermal units, data compiled by Bloomberg show. Canadian gas usually sells at a discount to American supplies because of its distance from major population and manufacturing centers, among other reasons.

Total U.S. oil production has plunged by nearly a third as an unprecedented cold blast freezes well operations across the central U.S., according to traders and industry executives with direct knowledge of the operations.

Crude output has now fallen by about 3.5 million barrels a day or more nationwide, they said, asking not to be identified because the information isn’t public. Before the cold snap, the U.S. was pumping about 11 million barrels a day, according to last government data. Production in the Texas’s Permian Basin alone — America’s biggest oil field — has plummeted by as much as 65%.

Operations in Texas have stumbled because temperatures are low enough to freeze oil and gas liquids at the well head and in pipelines that are laid on the ground, as opposed to under the surface as practiced in more northerly oil regions. The big question now is how quickly temperatures return to normal.

It Could Take Several Days to Restore Power in Texas (5:20 p.m.)

The operator of the Texas electric grid no longer expects all service to be restored in the state by Tuesday night, saying it could take days for enough power plants to be up and running.

One of the chief hurdles is that there isn’t enough natural gas flowing to fuel plants, Bill Magness, chief executive officer of the Electric Reliability Council of Texas, said in a briefing. He expects “significant progress” in the next several days but warned more power plants could still trip offline.

“We are seeing progress on restoration of the system,” Magness said. “There could be setbacks”

Earlier Tuesday, grid officials said they expected all power to be restored by the evening.

The deep is snarling shipments of goods from corn to soybeans, shutting meat plants and curbing ethanol production.

Traders say it’s increasingly hard to move grain to ports in the Pacific Northwest, and ice warnings are restricting navigation on the Illinois River. Energy costs soared, prompting some ethanol and soybean processing plants to slow down, said the traders, who asked not to be identified because the information is private. Cargill Inc. is curbing energy use while Archer-Daniels-Midland Co. slowed production at several locations due to gas shortages. Tyson Foods Inc. was among meat producers forced to shut plants in Texas.

Authorities in Harris County, Texas, the nation’s third-largest county and home to Houston, warned residents to stay off the roads and highways after sunset on Tuesday amid expectations that plunging temperatures and an approaching ice storm will make driving dangerous.

Meanwhile, long lines formed at grocery stores in scenes reminiscent of the early days of the Covid-19 pandemic as residents stocked up on necessities ahead of another round of punishing weather. Hotels in the Houston area suspended some meal service because of delayed food deliveries and vacancy rates were near zero as state-mandated power outages entered a third day.

Chevron Shuts in Some Permian Wells Due to Freeze (4:09 p.m.)

Chevron shut in compression and production at wells in Culberson County in West Texas due to cold weather, according to a state regulatory filing.

Compression was shut down first, then production shut wells in, causing flaring. Emissions began on Sunday.

Olin Corp., Indorama Ventures and other chemical producers are shuttering plants along a 150-mile stretch of the Gulf Coast as gas shortages and icy temperatures hinder operations.

Such shutdowns are not without danger — Olin’s Blue Cube plant in Freeport, Texas, suffered a leak from a valve as crews were winding down operations, resulting in ethylene dichloride and vinyl chloride emissions into the atmosphere, according to a state regulatory filing. Indorama alerted authorities and neighbors that it would be burning off excess gases frequently while it worked to suspend operations at its complex in Port Neches, Texas.

Venezuela-backed Citgo Petroleum Corp. has told its suppliers and customers that its Corpus Christ, Texas, refinery won’t be able to receive or deliver crude and refined products after a historic cold snap caused major disruptions to operations.

The company is in the process of assessing damage and evaluating a restart time for the 167,000 barrel-a-day refinery, according to a force majeure notice seen by Bloomberg. Part of the refinery experienced operating issues and unplanned unit shutdowns due to freezing weather and third-party supplier outages, according to the latest regulatory filing.