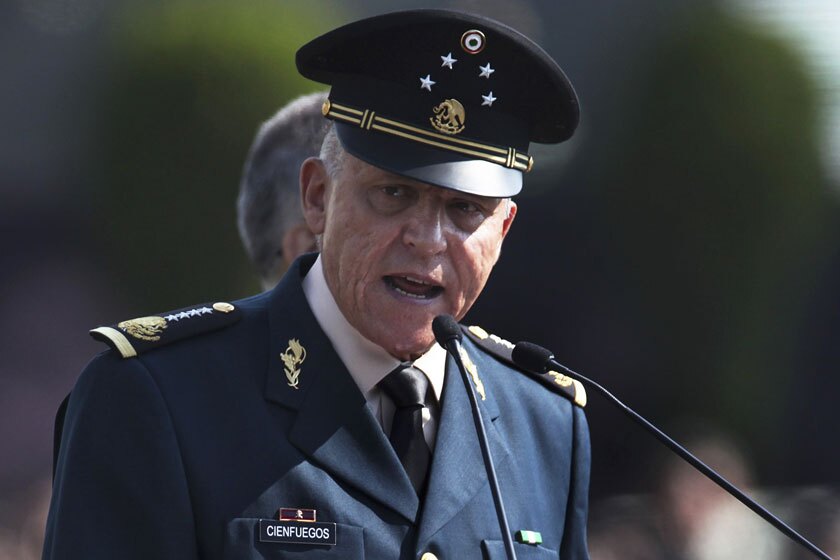 Less than a week after a former Mexican defense secretary was arrested on drug trafficking charges at Los Angeles International Airport last month, Mexican authorities summoned the U.S. ambassador to express their dismay — an action followed by a formal note of protest to Washington.

Angry that U.S. authorities had pursued the case without informing Mexico, Marcelo Ebrard, the foreign secretary, warned that Mexico was considering scaling back its collaboration with the U.S. Drug Enforcement Administration.

“There will be cooperation, but it will have to be on another footing,” Ebrard told Proceso, a Mexican weekly magazine.

It was a rare threat, however veiled, from the government of President Andrés Manuel López Obrador against the United States.

But the president and his allies in the military command got their wish Wednesday, when a federal judge in Brooklyn approved a request from U.S. prosecutors to drop the charges against the 72-year-old retired general, Salvador Cienfuegos Zepeda, and repatriate him to Mexico.

In explaining the extraordinary decision to suddenly end a multiyear investigation, U.S. authorities said in legal filings that “sensitive and important foreign policy considerations outweigh the government’s interest in pursuing the prosecution of the defendant.”

U.S. law enforcement authorities have long had a close, if sometimes bumpy, working relationship with their Mexican counterparts on a number of binational issues, notably narcotics trafficking, weapons smuggling and immigration. About 50 DEA agents are stationed in Mexico, according to the foreign ministry.

The deal to free Cienfuegos stunned observers in both the United States and Mexico and raised doubts about whether he will ever face charges in Mexico, which has a dismal record of prosecuting high-level corruption.

López Obrador, who called the deal to free Cienfuegos “incredible” and “exceptional,” said Mexican officials would review the evidence forwarded by U.S. authorities and decide whether to prosecute the case.

But the U.S.-Mexico arrangement guarantees only that Mexico will investigate Cienfuegos, not that he will face charges here. He returns to Mexico a free man.

López Obrador told reporters Wednesday that there would be “impunity for no one,” but he added, “At the same time we are not going to allow in any case that crimes be fabricated.”

Cienfuegos, who has been in custody in New York, pleaded not guilty to charges of drug smuggling and money laundering and signed off on the deal repatriating him to Mexico.

López Obrador has developed a close relationship with President Trump, sparking speculation here that the Trump administration may have agreed to drop the charges as a favor to him.

López Obrador is one of the few world leaders not to have congratulated Democrat Joe Biden on his election as president this month. But Ebrard, the Mexican foreign minister, said the U.S.-Mexico deal on Cienfuegos had nothing to do with the U.S. electoral process.

The U.S. about-face is especially stunning because U.S. prosecutors went to great lengths to keep the charges secret from Mexican authorities.

U.S. authorities sealed the 2019 indictment against Cienfuegos and never sought his formal extradition from Mexico, instead nabbing him Oct. 15 upon his arrival at LAX with his family.

Once Cienfuegos was in custody, prosecutors successfully argued that the former defense chief be held without bail, asserting that otherwise he would probably flee to Mexico, where cartel confederates and “former high-level corrupt government officials” would protect him.

Now, U.S. officials are returning Cienfuegos to the very place where they feared he would be sheltered from justice.

Cienfuegos, who served for more than 50 years in the Mexican military, was the defense minister from 2012 to 2018 in the administration of President Enrique Peña Nieto, the predecessor of López Obrador.

U.S. prosecutors said they had amassed a “strong” case against Cienfuegos, based in part on thousands of intercepted Blackberry communications.

His nickname, prosecutors said, was El Padrino, or “the Godfather,” and U.S. authorities alleged that he was a key cartel fixer who, in exchange for bribes, helped facilitate the smuggling of “thousands of kilograms of cocaine, heroin, methamphetamine and marijuana into the United States,” according to court filings.

Among other alleged acts, Cienfuegos was accused of shielding mob partners from military operations, initiating actions against rival gangs, arranging maritime transport for drug shipments, helping expand mob turf and introducing confederates to “other corrupt Mexican government officials willing to assist in exchange for bribes.” He was also accused of tipping off accomplices to U.S. law enforcement actions.

As defense minister, Cienfuegos had contacts with high-level U.S. officials, including a 2017 meeting in Mexico with John F. Kelly, then Trump’s chief of staff. Kelly, Cienfuegos and other Mexican top brass were present at a July 2017 operation in which the military destroyed five fields of opium poppies, the Mexican defense ministry said.

A year later, a Pentagon study center in 2018 awarded Cienfuegos its prestigious William J. Perry Award for Excellence in Security and Defense Education.

Behavioral Retargeting: What it entails.