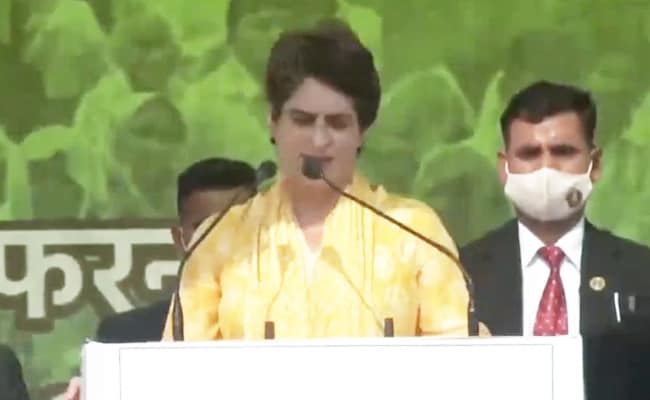 Congress leader Priyanka Gandhi Vadra today urged farmers – lakhs of whom have been protesting the new agriculture laws since November – to stay strong; “this government is weak… this government will have to back down,” she said at a rally in Uttar Pradesh’s Muzaffarnagar.

Ms Gandhi Vadra also warned farmers that the centre did not have their interests at heart. She pointed to what she said was around Rs 15,000 crore in unpaid dues to UP sugarcane farmers, and increasing gas and fuel prices, and accused Prime Minister Narendra Modi of disrespecting farmers.

“Gas prices are increasing also… diesel was Rs 60 in 2018, now it is somewhere near Rs 90. The BJP government earned Rs 3.5 crores by taxing diesel last year. Where is that money? Why did the people who irrigate the country with sweat not get money,” Ms Gandhi Vadra asked.

“Why don’t you listen to the farmers,” she added.

She also criticised the centre for its handling of the protest – which saw police fire tear gas and lathi charge farmers as they marched, peacefully, to the national capital last year, and fortify Delhi borders with barbed wire and concrete walls to stop them in their tracks.

“Lakhs of farmers have been sitting outside Delhi for more than 90 days… 215 farmers died… electricity and power supply were cut. Farmers were tortured and abused… but the Prime Minister calls farmers ‘family’ in parliament. He is making fun of farmers,” she added.

“I did not come to show my face for politics… I will keep coming. We will fight with you. Do not back down, this government is weak. This government will have to back down,” she concluded.

Farmers across the country have been protesting the agriculture laws for several months now.

The centre says the new laws will help farmers sell their produce at markets and prices of their choice, but the farmers say they will be exposed to bullying by corporates and will lose MSPs.

Eleven rounds of talks have been held with no breakthrough; the centre has said it will not scrap the laws and will offer only a verbal guarantee on MSPs, while farmers want the laws rolled back and a legal guarantee on minimum prices.

If you’re not using your iPhone and iPad’s built-in screen recorder, you should