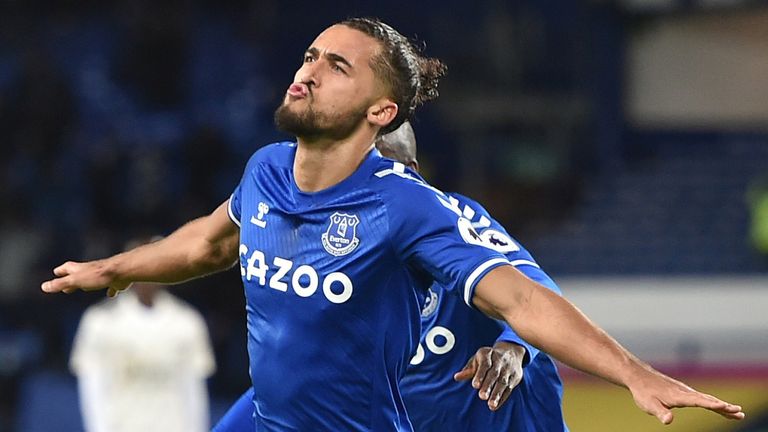 
Everton moved up to second in the Premier League while piling more misery on Mikel Arteta’s Arsenal with a 2-1 victory at Goodison Park.

Everton took the lead when Dominic Calvert-Lewin’s flicked header from Alex Iwobi’s cross deflected off Gunners captain Rob Holding and into his own net (22), but Arsenal levelled with Nicolas Pepe’s penalty after Tom Davies’ foul on Ainsley Maitland-Niles (35).

Everton went into half-time ahead thanks to Yerry Mina’s near-post header from a Gylfi Sigurdsson corner (44), and Arsenal came closest in a quieter second half as David Luiz hit the woodwork with a deflected effort after Jordan Pickford had fumbled a cross.

A year on from both Carlo Ancelotti and Arteta taking their respective jobs, their seasons continue to go in opposite directions as Everton’s third straight win leaves them second to Merseyside rivals Liverpool for 24 hours at least.

Arsenal’s rut continues; they stay 15th, with just 14 points from 14 games after losing five of their last seven in the Premier League.

How Arsenal fell flat again as Everton look up

The opening stages were stand-offish at Goodison Park, with both sides registering just one touch in the opposition box before Everton’s opener midway through the first half. Former Arsenal winger Iwobi’s low, early cross was flicked on by Calvert-Lewin, but hit Holding and found the bottom-left corner of his own net.

With Pierre-Emerick Aubameyang out with a calf injury, Arsenal lacked bite in the first half but equalised with their first shot on target as Davies’ swipe for a clearance caught Maitland-Niles in the area. Pepe stepped up and scored, becoming Arsenal’s leading goalscorer in all competitions with six.

After Calvert-Lewin had done superbly to win a corner as the clock ticked down to half-time, Sigurdsson’s resulting set-piece delivery found Mina at the near post as he peeled off Pepe and Bukayo Saka, glancing into the corner despite Bernd Leno’s touch.

Incredibly, Mina’s last four PL goals have all been scored in the 45th minute, as Everton picked the perfect time to score.

Arsenal were handed a chance to level early in the second half as Pickford failed to collect Willian’s cross, but Luiz’s deflected half volley from 15 yards hit the post and fell fortuitously to a blue shirt in the penalty area.

Pierre-Emerick Aubameyang was out with a calf injury for Arsenal, but Mikel Arteta said he should only be sidelined for a few days. Willian came in for him, while David Luiz replaced the suspended Gabriel, and Gabriel Martinelli returned to the bench for the first time since his knee injury in June.

For Everton, Jordan Pickford returned in place of Robert Olsen, while the injured Allan was replaced by Tom Davies. Seamus Coleman was on the bench for the first time in two months following a hamstring injury.

The Gunners huffed and puffed – Arteta’s team got younger and younger as Joe Willock was introduced and Gabriel Martinelli came on for the first time since March – but lacked quality in the final third as Everton managed the game in the second half, thanks in large part to Richarlison and Calvert-Lewin’s hold-up play.

Arsenal, who have not scored from open play in any of their last five Premier League away games, were restricted to long-range efforts as Pepe and the uninspiring Willian lashed well wide, and, despite some late pressure, Everton survived as Pickford tipped away Kieran Tierney’s late cross-shot to secure the points.

Everton were greeted to a huge ovation from the 2,000 fans inside Goodison Park upon the final whistle, but for Arsenal, the concern continues. The Gunners’ 14 points from 14 games this season is their worst record at this stage of a season since the 1974/75 campaign.

Everton now host Manchester United on Wednesday in the Carabao Cup last eight, live on Sky Sports Football at 8pm, before going to bottom side Sheffield United on Boxing Day at 8pm.

Cramer Shares His Thoughts On Wells Fargo, Caterpillar And More