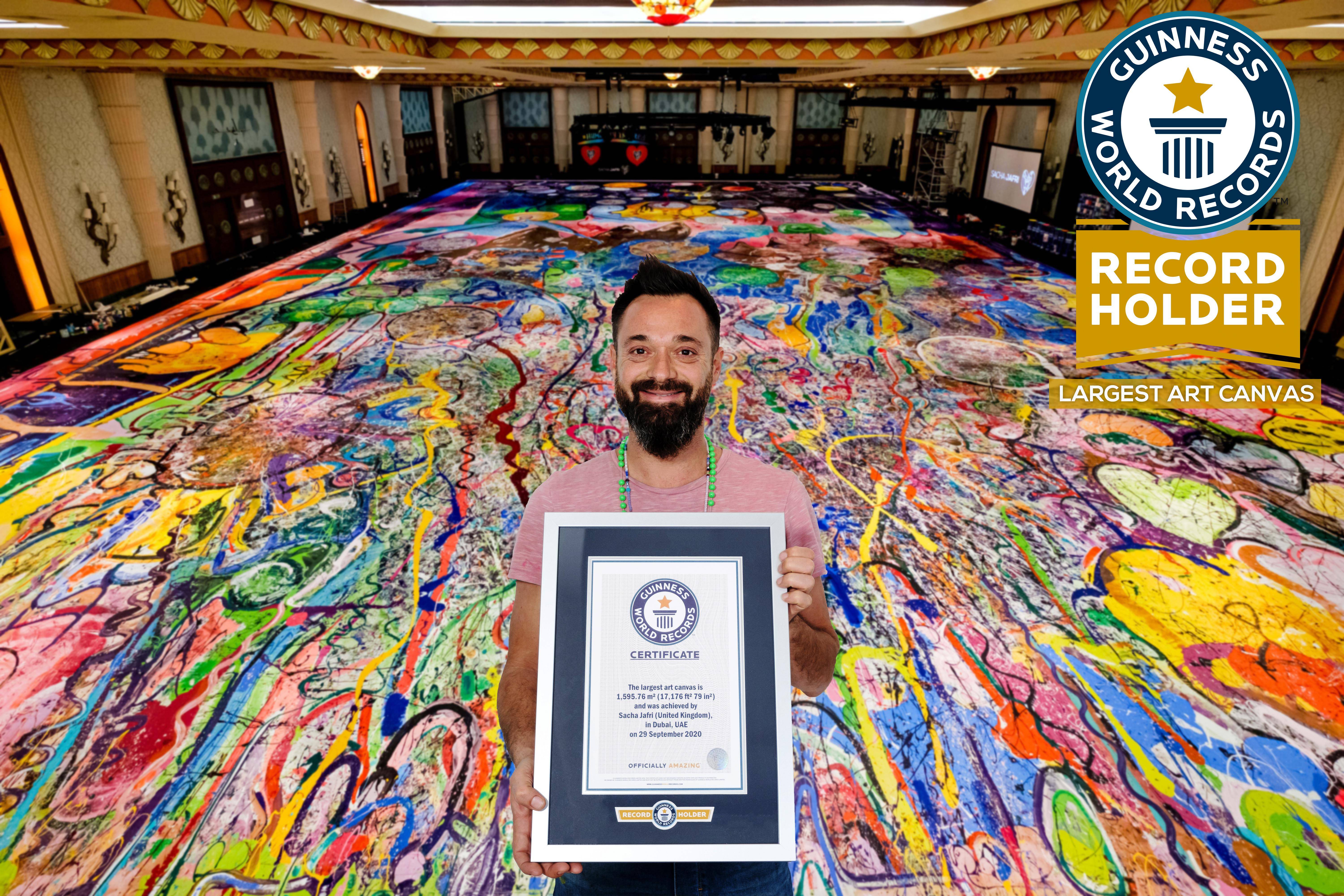 Official unveiling of the painting to take place in Dubai on February 25.

A renowned British artist and philanthropist has bagged the title of ‘The Largest Art Canvas’ in the world with a Guinness World Record set in Dubai.

The initiative, one of the world’s largest social, artistic and philanthropic projects, aims to raise more than Dh110 million to support children and youth around the world affected by the Covid-19 pandemic.

Record-breaking painting in #Dubai, the Largest Art Canvas in the World, set to raise $30 million for underprivileged youth. https://t.co/TTNThi8EaS pic.twitter.com/mFwzilcB2l

Created inside the ballroom of Atlantis, The Palm, which was converted into an art studio, the giant canvas took 28 weeks to create starting from March to September 2020. Spending almost 20 hours a day on the art piece, Sacha used 1,065 paint brushes and a whopping 6,300 litres of paint in order to complete the painting.

The painting was later broken down into numbered, signed, catalogued and framed canvases. A total of 70 individually framed pieces of the art piece will be sold in four auctions in 2021.

The funds raised will be donated for charitable initiatives in education, digital connectivity, healthcare and sanitation in partnership with Dubai Cares, UNICEF, UNESCO, Global Gift Foundation, as well as the UAE Ministries of Tolerance and Coexistence, and Education.

The initiative has been endorsed by more than 100 celebrities from across the globe.

Jafri said: “It was an honour to receive the Guinness World Records™ title for my project ‘The Journey of Humanity’. This is just the beginning of the ‘Humanity Inspired’ journey. ‘Humanity Inspired’ and ‘The Journey of Humanity’ represent much more than just creative work, it is my initiative for true societal change through the hearts, minds and souls of the children of the world – a springboard for a better future for all humanity.

“If one person can spend 20 hours a day (with only four hours of sleep) for seven months continuously, creating a painting of over 17,000 square feet, imagine what 7.5 billion people could do together if we stopped discrimination, judgement and agenda. One World, One Soul, One Planet’,” the artist added.

The official ‘Royal Unveiling’ of the painting is set to take place at Atlantis, The Palm on February 25 at the 2,100 square metre ballroom where the artwork was initially created. This will be the first time the canvas will be assembled back using each framed piece to recreate the original painting.

With special viewing platforms and a maze through which the painting can be viewed, the invitation-only unveiling event will observe strict social distancing protocols. The event, which will serve as a celebration of hope, culture and inspiration, will see special performances by some of the world’s greatest talents, including singer, songwriter, actress activist and X Factor judge Leona Lewis.

From February to May 2021, select pieces from ‘The Journey of Humanity’, along with Sacha Jafri’s celebrated ‘18yr Retrospective Collection’ will be on show at the largest gallery in the UAE, the Leila Heller Gallery located in Alserkal Avenue, Dubai. The gallery is helmed by internationally acclaimed gallerist Leila Heller, who is also known for her famous New York gallery featuring works by Andy Warhol, Richard Prince, Jeff Koons, Keith Haring and Tony Cragg.

Tough not to be upbeat when Thornton’s around