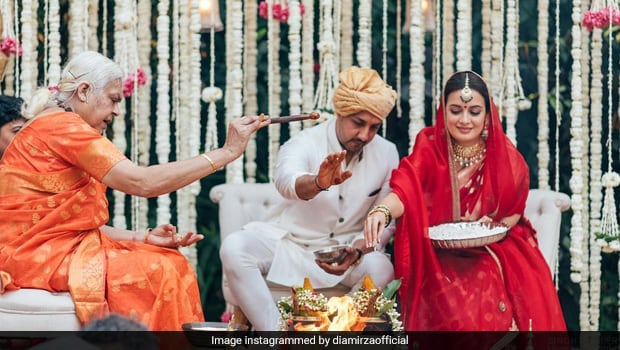 Dia Mirza met and distributed sweets to the media shortly after her wedding ceremony.

Congratulations are in order for Dia Mirza as the actor and former Miss Asia Pacific got married to businessman Vaibhav Rekhi at her residence in Mumbai yesterday, February 15th, 2021. The wedding was an intimate affair with only close friends and family in attendance, including actor Aditi Rao Hydari. Several pictures and videos from the ceremony have gone viral on the internet. The newlywed couple came out to meet media who had been waiting patiently to get a glimpse since morning.

Not only the couple met the media and posed for them, Dia being her gracious self, personally got a box of sweets and distributed it amongst them. A box full of Kaju Katli – the quintessential Indian mithai was offered to the paparazzi. Bollywood photographer Viral Bhayani shared a video of Dia Mirza meeting and offering them sweets. Take a look:

Doesn’t she look pretty and elegant? Dia Mirza took to Instagram to share some gorgeous pictures from the wedding and also revealed the team behind the affair.

The catering for the wedding was done by The Moveable Feast. The ceremony was organized at a garden at Dia’s apartment complex and was attended by just about 50 people. Dia and Vaibhav kept their relationship low-key; the news of their wedding took everyone by surprise. Many of their friends and family shared pictures from the bridal shower. Celebrity manager Pooja Dadlani, who appears to be a family member of Vaibhav, posted some of the first pictures of the two and wrote: “Welcome to the family, Dia”.

On the work front, Dia Mirza was last seen in ‘Thappad’ alongside Taapsee Pannu.