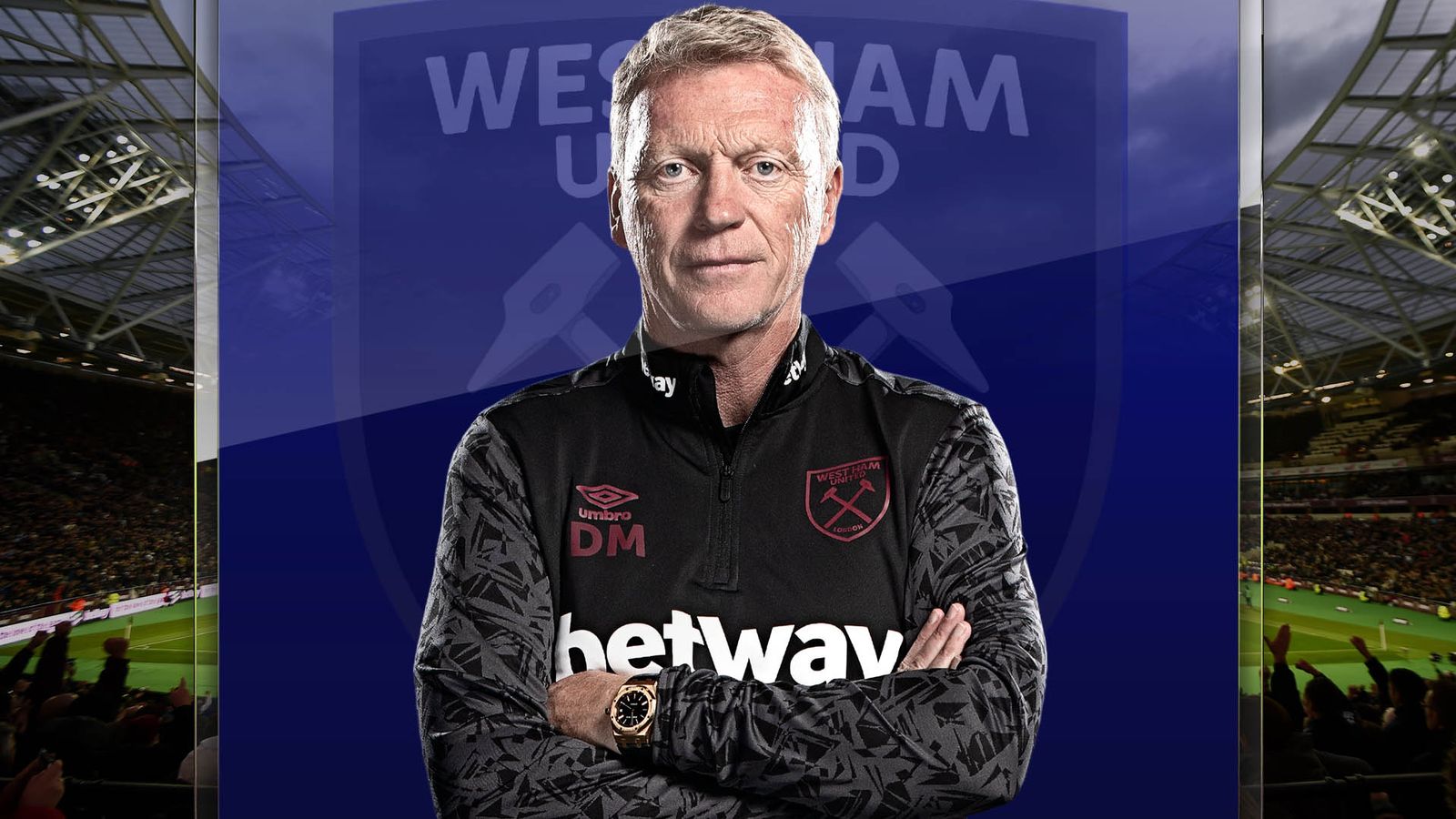 
“We have checked the goals we had at the start of the season about where we thought we would be – and our overriding feeling is we can put them in the bin. We have got a different set now.”

David Moyes smiles as he tells Sky Sports about how West Ham have exceeded even his own expectations this season.

Wednesday’s impressive 3-1 win at Aston Villa has them fifth in the Premier League, just a couple of points behind defending champions Liverpool.

Their total of 38 points from 22 games is their best return at this stage of a top-flight season for 35 years and they will be tipped to make it eight wins out of their last nine when they go to Craven Cottage on Saturday.

It is an incredible transformation from the relegation scrap of last season and credit to Moyes for unlocking the potential of these West Ham players – with the help of some key additions in the transfer market.

“I think our players are not fully aware yet of what they are capable of,” Moyes said, ahead of the final training session before facing Fulham. “I think there’s more to come – and because of that it gives me a great deal of excitement we can be better again.

“We need to keep up the good form, keep free of injury and all these things which can deter teams or knock you off line a little bit. If we can come through that then I think we’ve got a really good chance of trying to hang in there.

“If you had given us top half of the league before the season started I think we would all have shook your hand and said ‘thanks very much’. But we just need to see where we can go from here.”

Jesse Lingard’s two-goal dream debut at Villa Park was the latest highlight in what is becoming an increasingly impressive season for the east London side.

Aside from the opening day defeat to Newcastle, their five other Premier League defeats have only come against traditional heavyweights Liverpool (twice), Arsenal, Manchester United and Chelsea and in that midweek win there was further evidence West Ham are adding some finesse to the forceful play which got them out of trouble last season.

A combination of Lingard, Michail Antonio, Said Benrahma and Tomas Soucek linked up in attractive fashion for their three goals and there are promising signs of increased creativity in open play to go with their set-piece skills.

West Ham have scored 12 set-piece goals this season and conceded just two. They are the best figures in each department in the Premier League. But Lingard encapsulates a shift in approach in possession.

“His link-up play, his control… he gave us a little more confidence on the ball,” said Moyes of the Manchester United loanee. “I think he helped a lot of players around him improve as well, they were able to find him, get him on the ball.

“He got himself in a few shooting positions and I think if we can continue to get him into some good attacking positions then hopefully, he can come up with the goods for us and for some goals.

“But we also have some talented small players as well and we need them to be the creativity. I felt Jesse would give us an extra one. We brought in Said, we brought in Jarrod Bowen, and there’s Pablo Fornals and Manuel Lanzini who are all doing great.

“I felt we needed to keep adding to that so we had competition for places and when we need something different I have got something to call on.”

Another element of West Ham’s performance at Aston Villa was the deployment of two recognised right-backs in Ryan Fredericks and Vladimir Coufal in the starting XI. It raised eyebrows on social media ahead of kick-off but, with Fredericks playing a more advanced role on the flank and then able to help Coufal deal with Jack Grealish – which he did impressively – it was a move that paid off.

That tactical flexibility, which has also seen West Ham switch between three and four-man defences this season, is another indication of their development under Moyes.

“I don’t think we are at a stage yet where we can say this is our team and this is what we do,” explained Moyes. “We are still on a journey of having to play against really good teams and trying to cope with a lot of their strengths.

“I think there is much more flexibility in the Premier League generally with teams and Fredericks gave us a chance to play him as a wide right player and help us in different ways and he didn’t disappoint us.

“That’s what you need from your squad, to know you have got players who can come in and do different jobs.”

Moyes spoke about his ambition of creating a ‘new West Ham’ earlier this week and changing the mentality at the club. While his contract only runs until the summer, the Hammers’ fine first half to the season has given Moyes and the club scope to think about a longer-term vision. It’s a rare luxury in the game.

“A couple of times when I have been at West Ham, it’s nearly always been short-termism,” said Moyes. “Even when we came in last January, we had to bring in Soucek, we got Bowen in and they made a massive difference to the team and the club.

We’re breathing in a different type of air because we want to try to challenge the top boys – but we have to keep realising we’ve made a big step already in a year.

“I think there is an element of short-termism in every manager’s job and every period depending on where your job is. We have just for the first time been able to take a breath of air a little bit because we have got ourselves, I wouldn’t say away from relegation but it looks like it.

“But with that comes another expectation of ‘how high can you go, what can you do?’

“We are breathing in a different type of air because we want to try to challenge the top boys – but we have to keep realising we’ve made a big step already in a year.

“If I can make a similar-sized step next year it would be way beyond belief because most of the time now it will be small, slight improvements as you try to catch up with the big teams. It’s very difficult to make big steps.”

So what are the next steps on the path to becoming the ‘new West Ham’?

“The first thing would be to continue to build on where we are,” Moyes said. “We will have hopefully have another transfer window in the summer to try to step up again. But the big thing is we keep the consistency going, try to become a stable team who have got a bit of an identity about how we play and continue to play in the right way.

“We will not always play well but we want to try to build on what we are doing. My idea would be to pick up one or two players as we go along and see if we can keep improving this squad and team.”

Alongside that long-term idea, Moyes must continue to focus on the game-to-game, too, though – and the next Premier League test comes quickly at Fulham this weekend, followed by their FA Cup tie with Manchester United on Tuesday.

Moyes can at least call on some good experiences of facing Fulham. He’s beaten them more times than any other team he has faced as a manager.

“My biggest memory against them is my first game as manager of Everton – and we scored after 25 seconds, David Unsworth! It’s the sort of thing that sticks in your memory,” Moyes laughed, before heading off to that training session. The work to build West Ham into the consistent high-finishers his Everton team became goes on.