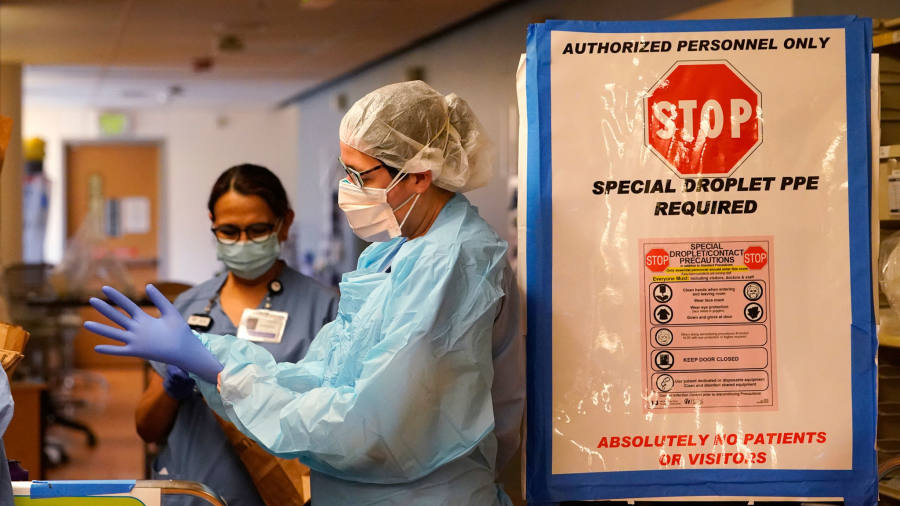 Coronavirus latest: US hospital admissions drop below 100,000 for first time in 2 months

Britain’s wave of Covid-19 infections continues to recede slowly, government scientists said. The figure for the whole UK is between 0.7 and 1.1 – a wider spread than the 0.8 to 1.0 range of a week ago. “The number of new infections is broadly flat or shrinking by up to 5 per cent every day,” their statement said.

Canada announced that all arriving passengers will be required to take a Covid-19 test and quarantine in a hotel for three days at their own expense. International flights can land only in Vancouver, Toronto, Calgary and Montreal. Ottawa has also cancelled all flights to Mexico and the Caribbean until the end of April.

France has tightened its coronavirus restrictions, closing its borders for arrivals from outside the EU from Sunday and shutting malls from the same day without imposing a full new lockdown. “Any entry to France or exit coming from or going to a country outside the EU will be forbidden,” said Jean Castex, prime minister.

The US Centers for Disease Control and Prevention has extended a declaration banning evictions of tenants that could be detrimental to public health control measures to slow the spread of Covid-19 to March 31. It was due to expire on Sunday, but Rochelle Walensky, the CDC director, signed the extension on Friday.

Passengers, some wearing masks, disembark from a British Airways jet at Heathrow

British Airways, easyJet and Virgin Atlantic will hang on to lucrative take-off and landing slots without having to use them after the UK extended waivers to airport rules. Carriers have parked their fleets during the pandemic, prompting suspension of rules forcing airlines to use their slots 80 per cent of the time or lose them.

Covid-19 vaccine manufacturer Moderna has told Italy and France it will deliver fewer doses than expected in February. Domenico Arcuri, the Italian special commissioner in charge of Italy’s pandemic response, said Moderna had told Rome that delivery volumes would be 20 per cent less than planned from early February.

Getir, a Turkish start-up backed by venture capitalist Michael Moritz and valued at about $850m, has launched a rapid delivery service for grocery and corner shop items in London. Venture capitalists and public investors have pumped money into delivery companies, which have boomed during the pandemic.

AstraZeneca has secured EU regulatory approval for its coronavirus vaccine, even as French president Emmanuel Macron cast doubt over the jab’s effectiveness for older people. The European Medicines Agency on Friday said it backed the Oxford/AstraZeneca jab for all individuals aged 18 and over.