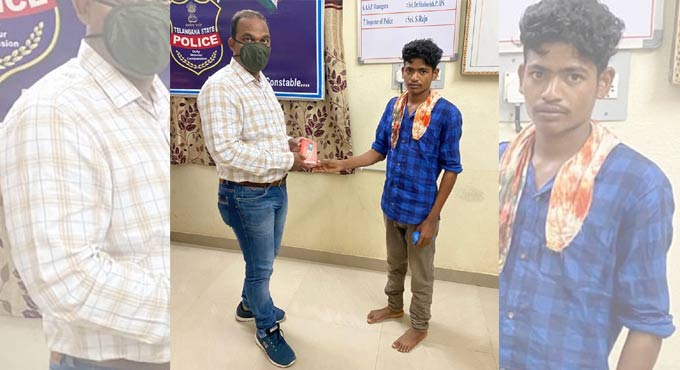 Aswapuram (Kothagudem): In an effort to take the edge off the influence of outlawed CPI (Maoists) on Guthikoyas, the Aswapuram police in Kothagudem district are reaching out to the tribal community with various service activities.

There are 12 Guthikoya habitations under the Aswapuram police station limits under the Manugur police sub-division. The tribal population that migrated from Chhattisgarh into the district years ago has been living in the forests detached from mainstream society.

Guthikoyas are considered the main source of supply of cadre and logistics to the Maoists owing to their presence in the forests. As part of the Police Department’s outreach activities, the tribals have been provided with television sets, study material, sports kits and others.

Taking this initiative to a new level, Aswapuram Inspector of Police (CI) Satla Raju has distributed mobile phones to the residents in Manubothulagudem and Mallaiah gumpu habitations. He bought over 30 mobile phones from his pocket for the purpose.

“During my visits to Guthikoya habitations, I found that the tribals were completely disconnected with others and lacked a proper channel of communication. Men have to walk from one habitation to another if they want to convey any message”, Raju told ‘Telangana Today’.

As the habitations are far off from one another, it makes it tougher for them to communicate. Hence, he decided to give them mobile phones, Raju noted.

Besides, police are engaging educated tribal youth to impart knowledge of letters to the children. There is a good response to this initiative as parents are voluntarily sending their children to the classes.

“We are also conducting free medical camps and distributing groceries to the tribals. The main objective of our efforts is to help Guthikoyas live a healthy and comfortable life as we do,” the CI noted. He further said that the tribals are advised not to give in to the outdated Maoists’ ideology and not to support them in any way as it can land them in trouble as the naxals often target their own informers.

It is planned to organise training classes for Guthikoya youth to take the upcoming police recruitment test, he added.

Case Against 6 UP Cops For Alleged Extortion, Corruption