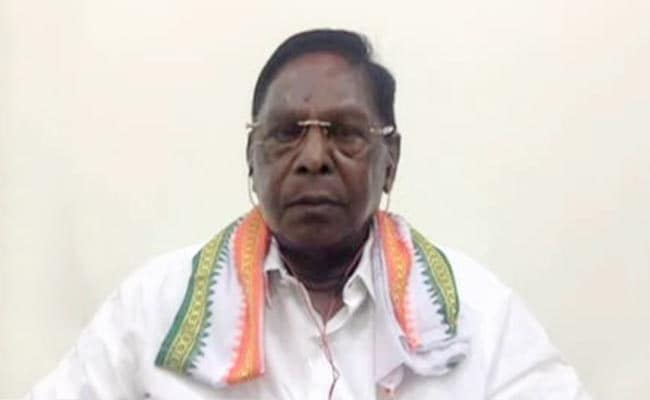 “Our government is not in a minority,” V Narayanasamy told NDTV.

The Congress government in Puducherry has slipped into a minority with two resignations in two days but Chief Minister V Narayanasamy said today he was confident of persuading the two leaders to stay. “Our government is not in a minority,” he asserted in an interview to NDTV.

The resignations of Malladi Krishna Rao and John Kumar, who quit back-to-back, have not been accepted and were still being considered by the Speaker, Mr Narayanasamy said. He also hit out at the BJP, accusing them of planning another “operation Kamal (lotus)” – the opposition’s name for what they call the BJP’s strategy of engineering defections and toppling governments – in Puducherry.

Four Congress MLAs have quit just months before Puducherry polls due by May. A Namassivayam and E.Theeppainjan resigned on January 25. Malladi Krishna Rao quit yesterday and John Kumar, today.

Of the 30 elected MLAs in the assembly, Congress had 15 members and, along with the DMK’s three and one independent member, was just past the majority mark of 16. After the resignations, the government and the opposition both are at 14. The Congress has 10 members, leaving its government one short of the majority mark, which is now 15 with the assembly strength dropping to 28.

Just four days ago, Malladi Krishna Rao had travelled to Delhi with Mr Narayanasamy to meet with President Ram Nath Kovind and request that Kiran Bedi be replaced as Lieutenant Governor of Puducherry.

This evening, Kiran Bedi was removed as Lieutenant Governor.

“We met the President because Malladi Krishna Rao had been harassed by Kiran Bedi several times. She has targeted him. She has rejected whatever proposal is related to his constituency. I have been fighting for him for at least four years. Kiran Bedi has been interfering in the day-to-day administration of our government and she has been trying to create problems…The people of Puducherry know it. Opposition parties were also targeting us. It was a difficult task for me to run the government for four years and nine months. But in spite of it our government delivered the services to the people,” said Mr Narayanasamy.

Mr Rao’s resignation was out of irritation with Kiran Bedi, Mr Narayanasamy claimed. “He was agitated because Kiran Bedi was blocking all his projects. He is still with me. I am confident I can persuade him,” he said.

“This is the BJP’s style of functioning. They will poach and buy MLAs. They have done it in Manipur, Arunachal, Gujarat, Karnataka, Madhya Pradesh…they are only purchasing MLAs. Shame on the BJP for targeting elected Congress governments,” the Chief Minister said.

This time, the party has tasked two senior leaders with managing the Puducherry polls — Arjun Meghwal and Rajiv Chandrashekhar. With Congress’s regional heavyweights coming on board, the BJP expects better results this time.

Mr Narayanasamy dismissed any threat from the BJP, saying Puducherry’s voters were different. “The people of Puducherry only go for secular parties. They will not support any communal elements. People who join the BJP in Puducherry… their political career will be doomed.”

When will Disneyland reopen? The latest updates as California Adventure looks to ticketed events