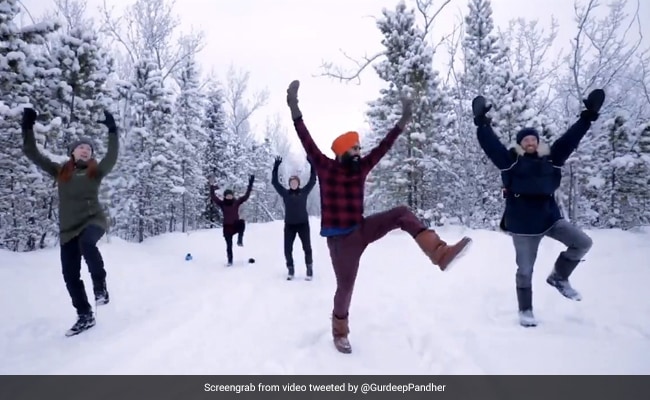 From a small cabin in the pristine wilderness of Yukon, a man is on a mission to spread positivity and cheer through his bhangra classes. Canadian dancer Gurdeep Pandher hosts outdoor bhangra classes in the freezing snowscapes of Yukon – a wild, mountainous and sparsely populated territory in Canada. A video currently going viral on social media shows him hosting a bhangra class for some members of Yukon’s French community, undeterred by the heavy snowfall. It even captured the attention of Canadian-American actor Ryan Reynolds, who hit the ‘like’ button.

No other place in North America gets as cold as Yukon during extreme cold snaps. According to Mr Pandher, the temperature in Yukon was minus 20 degrees Celsius when the video was recorded, although it felt closer to minus 30 degrees, he says.

The video features four people learning bhangra steps from the dancer while standing on a ground blanketed in snow. Behind them are several trees – all covered in snow to make for an enchanting view.

“When it was -20 degrees C (feeling like -30 degrees C with windchill) & the pandemic on top of that, these friends from the Yukon’s French community joined me for a ‘physically-distanced and pandemic-safe’ bhangra class for joy, exercise and positivity,” wrote Mr Pandher while sharing the video.

Outdoor winter Bhangra class in the Yukon. When it was -20ºC (feeling like -30ºC with windchill) & the pandemic on top of that, these friends from the Yukon’s French community joined me for a “physically-distanced and pandemic-safe” bhangra class for joy, exercise and positivity. pic.twitter.com/wkWK3WxZoq

The video has been viewed over 1.2 lakh times on the microblogging platform since being posted two days ago.

Canada-born actor Ryan Reynolds was among the thousands of Twitter users who ‘liked’ the dance video.

“Wow! Thank you for this burst of sunshine today,” wrote one person in the comments section.

“So Canadian! Bhangra lessons in the Yukon at minus 20,” said another.

“What a beautiful setting for a dance class!” a Twitter user remarked.

According to his website, Mr Pandher was born in Punjab and became a Canadian citizen in 2011. After moving to Yukon in 2012, he pursued his passion for dance and began teaching bhangra classes.