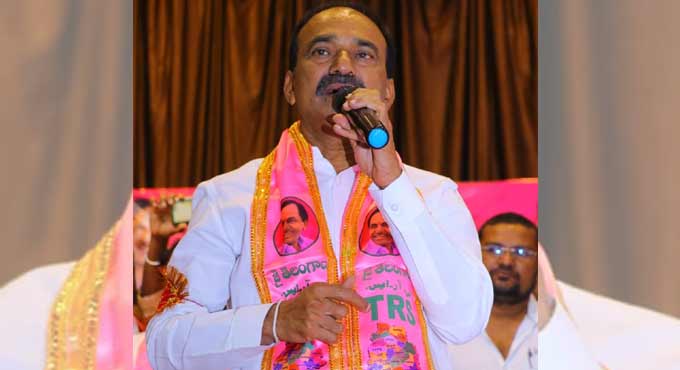 Eatala Rajender said special ID cards would be issued to those taking primary membership of TRS.

Karimnagar: Health Minister Eatala Rajender on Thursday asserted that it was not possible for political parties to win elections only with money power. Stating that workers were the backbone of any political party, he said committed cadres are more important to win the polls.

“I have seen 20 elections in different districts. Whichever party has sympathy among the public, will get success in the polls. At the same time, cadre will get opportunities when only the parties are strong”, he said.

Addressing Huzurabad constituency party workers in Jammikunta, Rajender said special ID cards would be issued to those taking primary membership of TRS. Besides police, TRS activists of other districts would respect them if they went to other areas.

Advising the cadre to consider membership as a great thing, he wanted the party workers not to take it easy. Since TRS has cadre in every village, as much as membership should be done, he advised.

They have fixed a target of 1 lakh membership in the Huzurabad constituency. It was not a big thing since there were 2.40 lakh votes in the segment. It should be completed in the coming 15 days period by following the deadline fixed by Chief Minister K Chandrashekhar Rao.

He always wishes that his followers should not get into trouble. However, he would be in the front row to help if any of his followers were in trouble, he promised.

Assuring to protect the interest of cadre, he said the Chief Minister has already cleared pensions and ration cards. The issue of the construction of houses was pending. It was in his notice.

A total of 3,500 houses were sanctioned by conducting a survey. However, they were stalled due to various reasons and double bedroom houses would be constructed in all villages.

Though a number of people have applied for Rythu Bima, some of the claims were still pending, he said and assured to clear them soon. Rajender emphasised the need to organise mandal level party workers meeting for every two to three months and villages meeting every month.