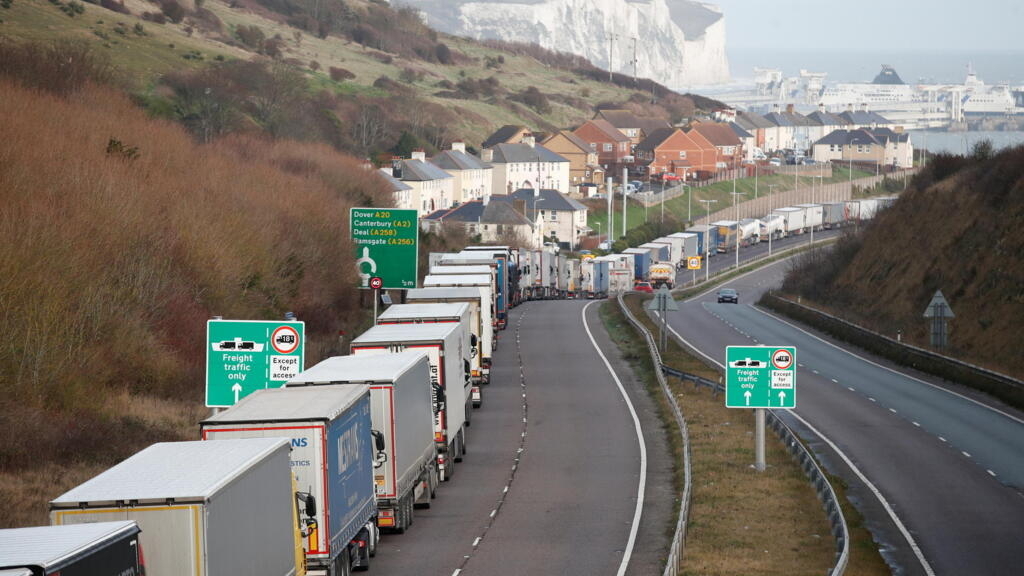 The United Kingdom stood shut off from the continent on Monday after European countries cut transport ties over fears of a new coronavirus strain, sowing chaos for families, truckers and supermarkets just days before the Brexit cliff edge.

France, Germany, Italy, the Netherlands, Austria, Switzerland, Ireland, Belgium, Israel and Canada were among those that shut off travel ties after Prime Minister Boris Johnson warned that a highly infectious new strain of the virus was a danger to the country.

Johnson was due to chair an emergency response meeting on Monday to discuss international travel, in particular the flow of freight in and out of Britain. EU officials were also expected to hold talks on coordinating their response.

France shut its border to arrivals of people and trucks from the United Kingdom, closing off one of the most important trade arteries with mainland Europe, a step Transport Secretary Grant Shapps said was surprising.

“We’re doing everything we can to get that restarted,” Shapps told Sky. “They’ve said to us they want to restart the hauliers as quickly as possible.”

As families and truck drivers tried to navigate the travel bans to get back home in time for Christmas, Britain’s second-largest supermarket chain, Sainsbury’s, said gaps will start to appear on shelves within days if transport ties are not quickly restored with mainland Europe.

“If nothing changes, we will start to see gaps over the coming days on lettuce, some salad leaves, cauliflowers, broccoli and citrus fruit – all of which are imported from the continent at this time of year,” Sainsbury’s said.

Shellfish producers in Scotland said they had tonnes of perishable products stranded on roads as the French border was closed. Disruption in Britain will also snarl supplies to Ireland.

Hong Kong is also due to ban all flights arriving from the United Kingdom from midnight, becoming the first city in Asia to do so. Asian nations including Japan and South Korea said they were closely monitoring the new strain.

Britain’s Shapps said getting the bans lifted as swiftly as possible was his priority but that given British preparations for the end of the Brexit transition period, the country was well positioned for disruption.

Johnson on Saturday cancelled Christmas plans for millions of British people due to what he said was a more infectious strain of the coronavirus, though he said there was no evidence that it was either more lethal or caused a more severe illness.

The new variant contains 23 different changes, many of them associated with how it binds to cells and enters them. Shapps said Britain had done some of the best global analysis of the mutations of the virus so it was simply seeing what was already at large in other countries.

The British government triggered plans it had for stacking up trucks in the southeast county of Kent – part of its plans for potential disruption when the United Kingdom exits the EU’s orbit with or without a trade deal at 11pm on December 31.

Trucks are being stacked on the M20 motorway through Kent, heading towards the ports, which is closed to normal traffic. A nearby airport will also be used to hold freight.

The government has urged everyone to avoid traveling to Kent, which hosts many of the cross-Channel ports. Dover notably sees around 10,000 lorries pass through every day, accounting for around 20% of the UK’s trade in goods.

“Sick Man of Europe”, the Daily Mirror newspaper said on its front page beside a picture of Johnson while the Sun newspaper said “French show no merci”.

The closure of the Channel Tunnel and ports for onward travel to France will affect the export of goods such as fish and shell fish from Scotland to Europe, and the import of food for British supermarkets if, as expected, European drivers refuse to travel.

Jon Swallow, a director of the British logistics group Jordon Freight, said the move by France would deter European drivers from coming to Britain both now and after the end of the year for fear they will get stuck.

“This is a serious situation as the stockpiled goods expected here are for Christmas and to help stabilise January,” he told Reuters. “This shows how fragile the cross channel route is.”

Shapps, the transport secretary, insisted that the public won’t notice any shortages “for the most part” as a result of the ban on lorries and that the supply of coronavirus vaccines will continue as they come via containers that are unaffected.

But the British Retail Consortium warned that the closure of France-to-UK traffic would create trading “difficulties” in the busy Christmas period.

“Retailers have stocked up on goods ahead of Christmas which should prevent immediate problems,” said Andrew Opie, Director of Food & Sustainability at the British Retail Consortium.

“However, any prolonged closure of the French border would be a problem as the UK enters the final weeks before the transition ends.”

Trade association Logistics UK has urged people to stay calm and not to rush to supermarkets to stockpile goods.

“Shoppers should not panic buy,” said Alex Veitch, General Manager at Logistics UK. “Retailers will be making every effort to ensure there is stock within the system, including fresh produce, and it is important that we remember that inbound traffic still has access to the UK.”