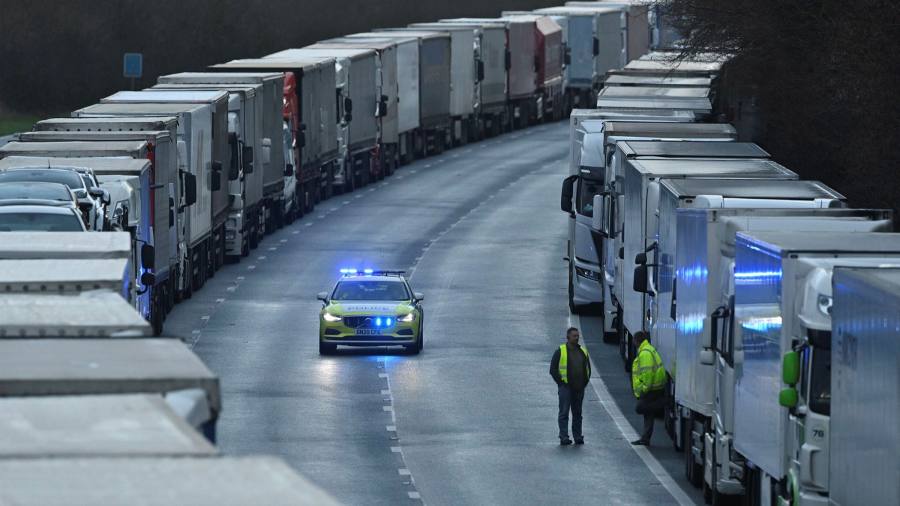 Britain and France race to negotiate reopening of borders


Britain and France were on Tuesday racing to agree a swift reopening of trade routes across the Channel, as trucks remained stuck on either side of the border after European countries prevented travel from the UK due to fears over its new strain of coronavirus.

French officials said reopening their border to allow crucial freight crossings from the UK depended on a system to ensure that truck drivers did not help spread the new coronavirus variant across the continent. Access via the Channel Tunnel was cut off for an initial period of 48 hours on Sunday evening.

EU member state ambassadors in Brussels were due to hold talks on Tuesday about a common approach to border restrictions in response to the new Covid-19 strain, after most European countries stopped arrivals from the UK by plane or train in the past two days.

The European Commission is expected to issue guidelines for EU countries later today on what border restrictions to impose in response to the new coronavirus strain, officials said

Thousands of European truck drivers, nearly 1,000 of them French, are stuck on the English side of the Channel because of the French border restrictions on travel announced on Sunday, according to transport companies. Priti Patel, the UK home secretary, said on Tuesday morning that around 1,500 lorries were backed up on the M20 motorway or nearby Manston airport in Kent.

British supermarkets have warned that some fresh fruit and other products could start to run out by the end of the week if the UK trade route to the continent for perishable goods remained blocked.

Most of the south-east of England, including London, is currently in effect under lockdown, in the government’s highest tier 4 level of restrictions, with only essential shops open. Patrick Vallance, the UK’s chief scientific adviser, warned on Monday that the new strain was spreading across the country and was likely to force more of the country into tougher restrictions.

The chief executive of BioNTech said on Tuesday morning that the German pharmaceutical company, whose vaccine has been approved for use in the UK, is confident that its coronavirus vaccine works against the UK variant, though further studies were needed to be completely sure.

European stocks recovered on Tuesday after a steep sell off on Monday driven by concerns about the new strain of the virus. The regional Stoxx 600 index rose 1.2 per cent in early trading, having fallen by 2.3 per cent on Monday after dozens of countries around the world closed their borders to UK travellers. Germany’s Xetra Dax added 1.5 per cent and the UK’s FTSE 100 rose 0.4 per cent.

Several French ministries, including those for transport, health, foreign affairs and the interior, are involved in negotiations over the new health protocol to enable the border to reopen. France has said individual travellers will need PCR tests showing they do not have Covid-19 before departure, but the rules for lorry drivers have yet to be worked out.

Allies of Boris Johnson, UK prime minister, said that a new “border protocol” would almost certainly also involve the testing of drivers for coronavirus before they embarked on ferries or the Eurotunnel.

Mr Johnson had said after a phone call with Emmanuel Macron, the French president, on Monday that the two sides wanted to unblock the freight route “in a few hours”. He said the two leaders, who are at odds over the detail of a post-Brexit UK/EU trade deal, had had “an excellent conversation” and had agreed to reopen the route swiftly. Mr Macron’s office said only that the two sides would stay in touch.

But on Tuesday morning British officials said details of the new plan were still being discussed. “We need the detail,” said one.

One issue to be resolved is whether “quick turnaround” lateral flow tests will be sufficient to satisfy EU countries or whether more accurate PCR tests, which take longer to process, will be required for truckers.

Ms Patel told the BBC: “Discussions about the type of testing are taking place between the transport secretaries here and in France.” She said talks with Paris were “positive and proactive”.

Alexis Degouy, who heads the French transport employers group Transport et Logistique de France, said the aim was a protocol for drivers that would be “harmonised across Europe”.

EU member states on Monday tasked the European Commission to draw up proposed guidelines for a co-ordinated EU approach in relation to connections with the UK. The new coronavirus strain has already been found in patients in EU countries, including Denmark and Italy.