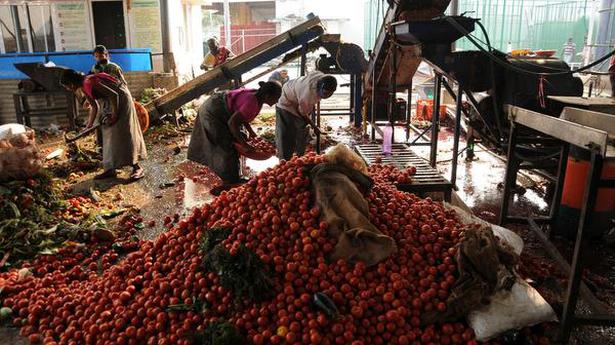 Prime Minister Narendra Modi during his Sunday radio address – Mann Ki Baat – has mentioned about the garbage to power plant being commissioned inside the Dr. B.R. Ambedkar Agriculture Market in Bowenpally where vegetable and fruit waste is being used to generate power to the extent of 500 units a day and 30 kilos of green manure.

This is being done by making use of 10 tonnes of left over market waste. The power generated is being used to light up the market and also to run the canteen in the premises enabling the market committee to make substantial savings in power bills.

‘Isn’t it amazing” that the Bowenpally vegetable market instead of letting the vegetable rot, spreading unhygienic conditions – is utilising it to generate power, he said.

“This is the power of innovation, it was nice to learn about it. This is the journey of turning garbage into gold,” the Prime Minister remarked while explaining how the traders decided to make use of the vegetable waste usually left to rot in markets elsewhere.

CSIR-Indian Institute of Chemical Technology (IICT) has designed and patented the high rate biomethanation technology based Anaerobic Gas lift Reactor (AGR) for this ₹3 crore project funded by the Department of Biotechnology and the State government’s Agriculture Marketing Department.

Chief scientist A. Gangagni Rao and his team had already commissioned 20 such projects across the country and 10 more are under construction. While the Bowenpally vegetable market garbage to power plant story has been featured in these columns few days ago (Jan.18), the pioneering work being done by the IICT team from the pilot project stage was also reported extensively here over the years.

3 Monster Growth Stocks That Could Weather the Volatility
Is the Rangers’ 2020 No. 1 overall pick, Alexis Lafreniere, butt?