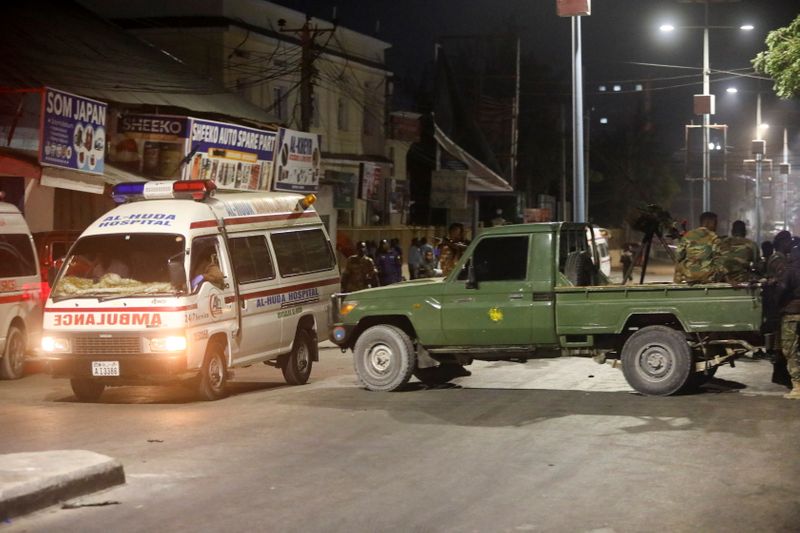 © Reuters. Somali security officers secure the scene of a car bomb explosion as paramedics await to rescue the injured in the Kilometre 4 area of Mogadishu

By Abdi Sheikh and Feisal Omar

MOGADISHU (Reuters) – A suspected suicide car bomb exploded on Sunday in Somalia’s capital and was followed by a shootout between militants and security forces at a hotel, causing an unknown number of casualties, witnesses and authorities said.

The militant Islamist group al Shabaab, which is linked to al Qaeda and often carries out bombings in its war on Somalia’s government, claimed responsibility via its radio station.

“A speeding car exploded near the hotel and checkpoint. The blast shook us and heavy gunfire followed,” shopkeeper Ali Abdulahi told Reuters of the incident, which occurred in the busy Kilometre 4 area of Mogadishu.

A Reuters journalist saw security forces besiege the area, where cars are inspected en route to the airport and where politicians regularly gather at the hotel.

“The blast made the hotel tremble as we sat inside and were talking. We were panicked, confused,” witness Ahmed Nur said, adding that he escaped via a ladder down a wall. “I jumped down and ran.”

Police spokesman Sadik Ali said many people had been rescued from the Hotel Afrik.

“There must be casualties because the militants first started the attack with a suicide car bomb against the wall,” he told Reuters. “The operation still goes on, casualties will be known later.”

Al Shabaab wants to rule Somalia according to its interpretation of Islamic sharia law.

There was no immediate word from Somali officials or the African Union (AU) peacekeeping mission, which supports the government against al Shabaab.

Al Shabaab’s radio Al Andalus said fighters had gone into the hotel after a suicide car bomb. “A martyrdom operation by the mujahideen goes on at Hotel Afrik, which is a cover-up for officials from the apostate government,” it said.

Separately, eight children died on Sunday in a town outside of the capital Mogadishu, after a mortar shell they had found exploded, a local official said, adding 11 others were injured.

The children were aged between four to 12, said Osman Nur, chairman of Shalambood, a town 90 km (56 miles) from Mogadishu.