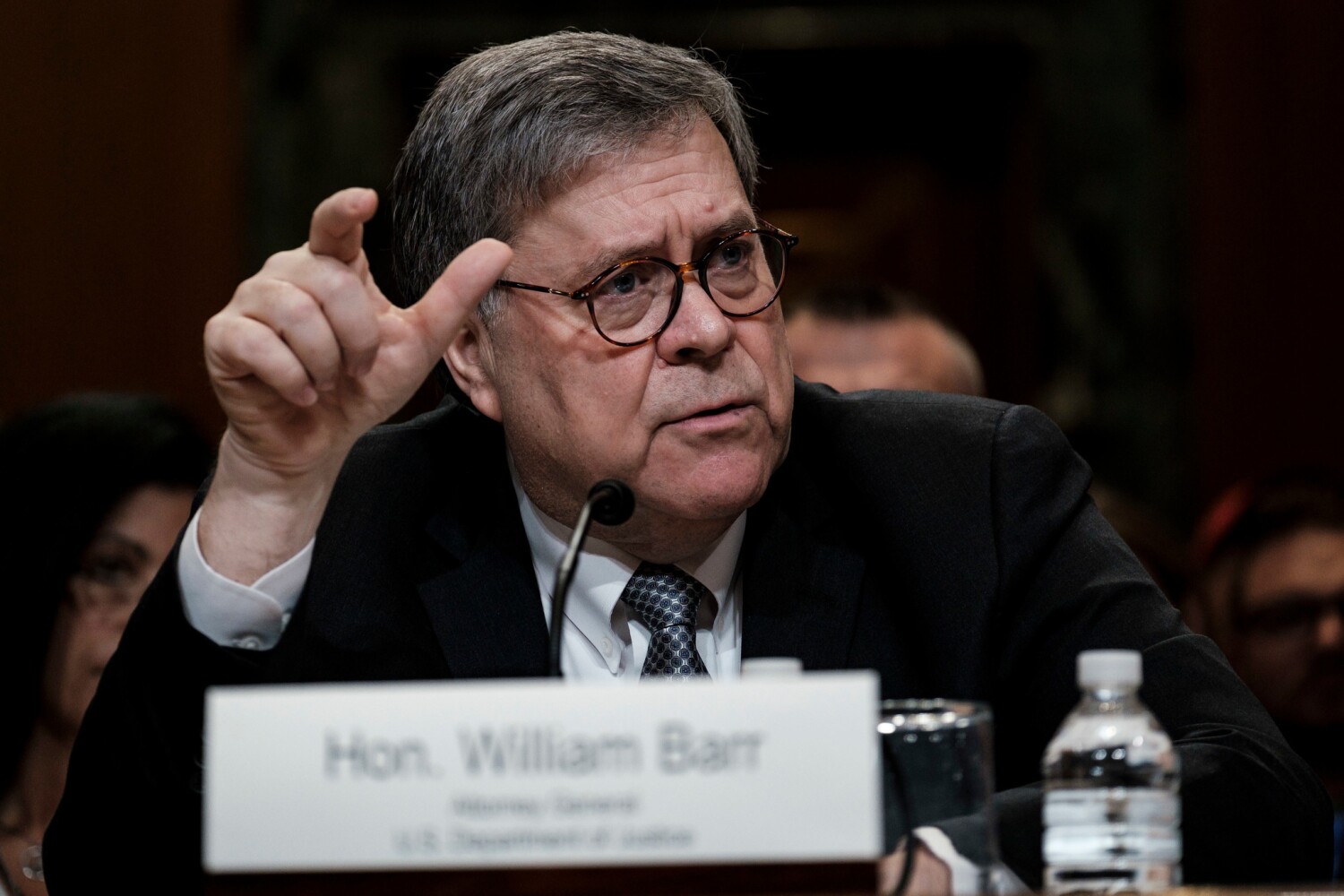 Outgoing Atty. Gen. William Barr, speaking to reporters for what is likely the final time before he leaves office later this week, said Monday he saw no reason to appoint a special counsel to investigate President-elect Joe Biden’s son and threw cold water on President Trump’s efforts to overturn an election he lost.

“To the extent that there’s an investigation I think that it’s being handled responsibly and professionally,” Barr said. “Currently within the department and to this point, I have not seen a reason to appoint a special counsel and I have no plan to do so before I leave.”

Trump and his political allies have been pressing Barr to appoint a special counsel to investigate Hunter Biden, who disclosed last month that his taxes were being investigated by federal authorities. Federal law enforcement officials are focusing their attention on whether he violated tax or money laundering statutes in work he did overseas, a Justice Department official said.

Barr’s comments came during what might be his final press conference as the nation’s top law enforcement official. He is scheduled to resign as attorney general Wednesday. Deputy Atty. Gen. Jeffrey Rosen will take charge of the department.

Tensions between Barr and Trump have grown in recent months over the president’s tweeting about Justice Department investigations and Barr’s statement earlier this month that his agency had found no evidence of widespread voting fraud that could have tilted the election to Biden. Trump has attacked Barr for those remarks.

The attorney stood by his earlier election fraud assessment and seemed gloomy when questions turned away from the topic at hand — the charging of a third suspect in the 1988 bombing of a Pan Am jetliner over Scotland — and onto matters involving Trump and the election.

Barr said he saw no need to seize voting machines, which associates of Trump have urged the president to do, or appoint a special counsel to investigate voter fraud. In recent days, Trump is reported to have mulled tapping Sidney Powell, an attorney who has promoted among the most outrageous and baseless conspiracy theories related to voting, to be that special counsel.

Trump would almost certainly need the help of federal prosecutors to issue grand jury subpoenas and search warrants to obtain and examine the devices.

Barr also aligned himself with U.S. intelligence officials in asserting Russia was behind a recently discovered cyberattack of multiple federal agencies and companies. “I agree with Secretary [of State Michael R.] Pompeo’s assessment that it certainly appears to be the Russians,” Barr said, citing remarks by the administration’s top diplomat during a radio interview last week.

Democratic and Republican members of Congress have expressed dismay at Trump for downplaying the sophisticated and massive hack. In a series of tweets Saturday, Trump blamed the media for overhyping the intrusion and said China might be behind it.

Barr, 70, turned introspective during his final comment at the lectern, while ducking a question.

“I was not intending to come back into government, but I knew I was signing up for a difficult assignment at this department,” he said. “As I’ve said there were rough times, and I came in because I felt that I could help lead the DOJ during this particular period.

“And I don’t regret that at all. I don’t regret coming in because I think it’s always an honor to serve the nation and the American people. So that concludes this press conference. Thank you very much.”