At 98, This Aatmanirbhar Man Vijay Pal Singh Sells Chana On The Streets Of UP’s Raebareli 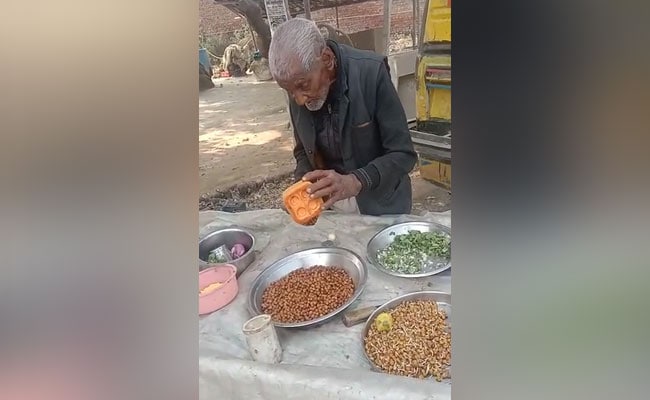 Vijay Pal Singh was honoured by the Raebareli administration on Thursday.

A 98-year-old man in Uttar Pradesh’s Raebareli, 79 km from state capital Lucknow, was honoured by the district administration for being self-reliant and independent at his age. Vijay Pal Singh sells chana, or boiled chick peas on the streets of a village in Raebareli.

A viral video shows Mr Singh standing before what appears to be a platform or a table by the side of a road and intently focusing on his chana preparation as he talks to a man who recorded the video. “The family is big,” he says, when asked about his family. The man went about business, squeezing lemon juice into the chana in a piece of newspaper, as he answered the customer’s questions.

Asked why he needed to trouble himself with this job at his age, Mr Singh said he does not want to sit at home as it makes him feel weak.

A 98 yr old man who sells chana outside his village in UP’s Rae Bareli was felicitated yesterday by @VaibhavIAS .The gentleman’s story gained traction after this viral video shot by a customer where he can be heard saying this is not out of compulsion but to stay fit … pic.twitter.com/oLokIr3dMj

Vijay Pal Singh’s remarkable independence at 98 was noticed by the district officials after his videos were viral on social media.

“His video was viral and our Chief Minister too had taken note of it… We have given him a ration card. We’ve also given him funds for the construction of a toilet. Whatever baba needs, the administration will cooperate. I like how social media brought out his story to people. Baba is an inspiration for us. Baba told us that he is not doing this job out of compulsion but because he wanted to be aatmanirbhar (self-reliant),” Mr Shrivastava told reporters.

The elderly man walked the support of his new walking stick and an official as he was ushered out of the government office following the presentation ceremony.

(With inputs from ANI)