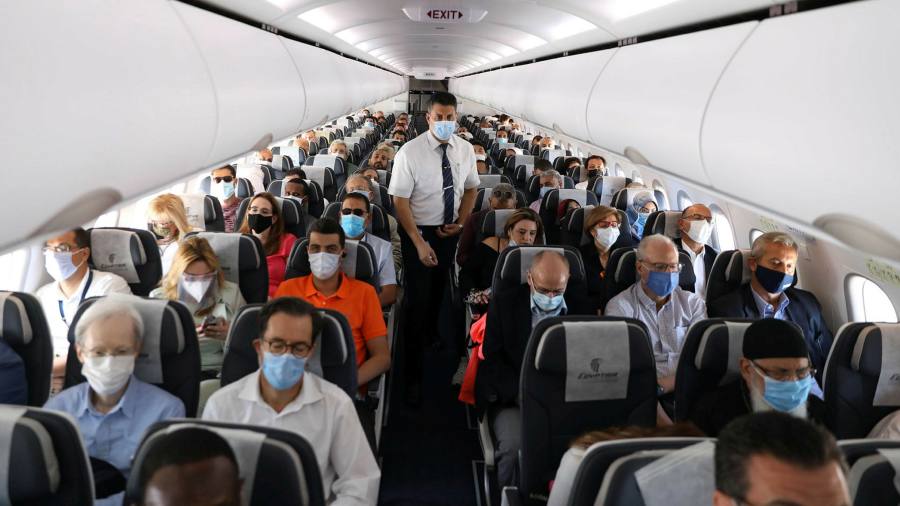 Are planes as Covid-safe as the airlines say?

The vaccinations have begun, but so have the coronavirus mutations. We may be able to limit Covid-19 but it’s going to be around, as UK government chief scientific adviser Patrick Vallance says, “probably forever”.

So will we be able to fly again without fear of infection? How safe can we feel sitting shoulder to shoulder with strangers for hours in a sealed tube? Pretty safe, according to the Harvard TH Chan School of Public Health, which says we have less chance of contracting Covid-19 on an aircraft than almost anywhere else.

The school’s Aviation Public Health Initiative says that modern planes’ ventilation systems, with their high efficiency particulate air (Hepa) filters, remove more than 99.97 per cent of the nasty stuff, including bacteria and viruses. Its report, published in October, says the result is cleaner air than in our offices or shopping centres.

If someone coughs or sneezes in a plane, “contaminants released in such events are fully flushed from the cabin in as little as two to five minutes, as opposed to some six hours in a commercial or retail space,” the report says. Some readers have emailed me expressing doubts about Hepa filters, and their scepticism will rise when they hear that the Harvard report was sponsored by airlines, aircraft manufacturers and airport operators.

The Harvard specialists insist their findings were unaffected by the funding. Is there any evidence that their report is wrong? One case of possible in-flight contamination was a Vietnam Airlines flight from London to Hanoi in March last year, after which 16 passengers and crew tested positive for Covid-19.

In a paper published in November, a team of Vietnam and Australia-based researchers say there is strong evidence that a 27-year old Vietnamese businesswoman, who had been in Milan and Paris before coming to London, passed the infection to others while on board. The likelihood of in-flight transmission was strengthened by their discovery that 11 of the 15 others infected were sitting within two seats of her in business class.

The Harvard report says that Hepa filtration needs to be supplemented by other anti-infection measures, including mask wearing. The Vietnamese researchers concede they have no data on mask-wearing on the London-Hanoi flight and that face coverings were neither mandatory nor widely used on planes back in March.

More concerning is a study of a flight into Ireland last summer, after which 13 passengers tested positive for Covid-19. A study by researchers from Ireland’s public health department found that mask-wearing was widely observed on board the seven-hour flight, which was only 17 per cent full. Although some of the passengers might have been exposed during overnight transfer stops or in lounges before the flight, on-board transmission appeared to be the only possibility in four cases.

There are very few similar examples of proven in-flight transmission. Given the air filters’ effectiveness, we should probably be more worried about proximity to infected people at the airport, in immigration queues or getting on and off the plane. When I contacted FT journalists worldwide who had recently flown, most suggested that mask-wearing on-board was widely observed, although one colleague on return flights between London and Warsaw said many passengers’ masks didn’t cover their noses, and some sipped from cans to avoid wearing masks at all.

The real problem, reported by colleagues in the US, UK, France, Italy and Russia, was getting on and off the aircraft. The Harvard study recommends airlines strictly control boarding and leaving the plane. Colleagues described getting on and off as, variously, a “joke”, “no respect” and “a total shitshow”. Passport control was often the same.

Sitting in a plane probably presents few dangers of infection. It’s what happens before and after that are the real problems.

Listen to our podcast, Culture Call, where FT editors and special guests discuss life and art in the time of coronavirus. Subscribe on Apple, Spotify, or wherever you listen

Stimulus checks and SSI, SSDI: Changes to the third payment, how to claim money and more