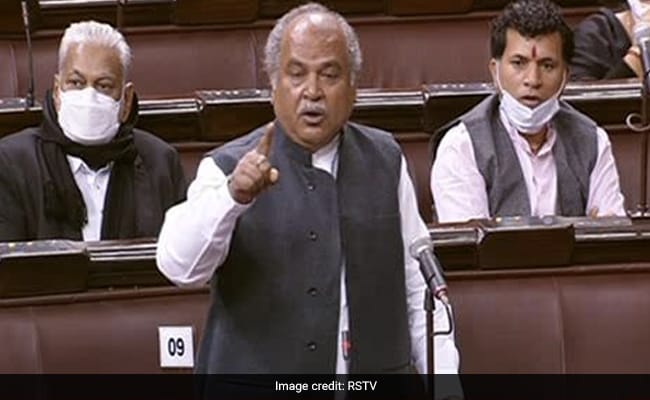 Protests over farm laws are limited to only “one state” and farmers are being “instigated”, Union Agriculture Minister Narendra Singh Tomar said in parliament today, as the massive agitation on the borders of Delhi entered 72nd day.  The minister’s “one state” attack refers to the protest led by farmers mainly from Punjab, a Congress-ruled state, as he countered the opposition’s allegation that farmers across the country are agitated over the three new laws.

“The world knows that farming is done with water. Only Congress can do farming with blood,” the minister said in the Rajya Sabha.

“Farmer unions, opposition parties have failed to point out a single flaw in three new farm laws,” he said in the upper house, adding that the government and Prime Minister Narendra Modi are committed to the welfare of farmers.

“We are not standing on prestige. We have been asking what is black in this law and no one is forthcoming,” Mr Tomar said, reiterating the centre’s stand.

The Congress and other opposition parties, who support the demand of farmers that the laws be repealed, have attacked the government in parliament over the issue even as it defended the contentious new laws.

Attacking the government, opposition parties said trenches have been dug, barbed wires put up and spikes installed at the sites of farmers’ protests, whereas bridges should have been built to win over them.

Mr Tomar today said that an agriculture infrastructure fund worth Rs. 1 lakh crore has been provided under the Atmanirbhar package and that the centre has tried to ensure that requisite investment reaches the agriculture sector.

Farmers fear the new laws will deprive them of guaranteed minimum earnings and leave them open to exploitation by big business. Eleven rounds of talks have been held between the farmers and the government but there been no breakthrough. The farmers have turned down the centre’s last offer to put the laws on hold for 18 months while a special committee conducts negotiations.