After deadly Capitol riot, Trump impeachment trial to open with fight on Constitution By Reuters 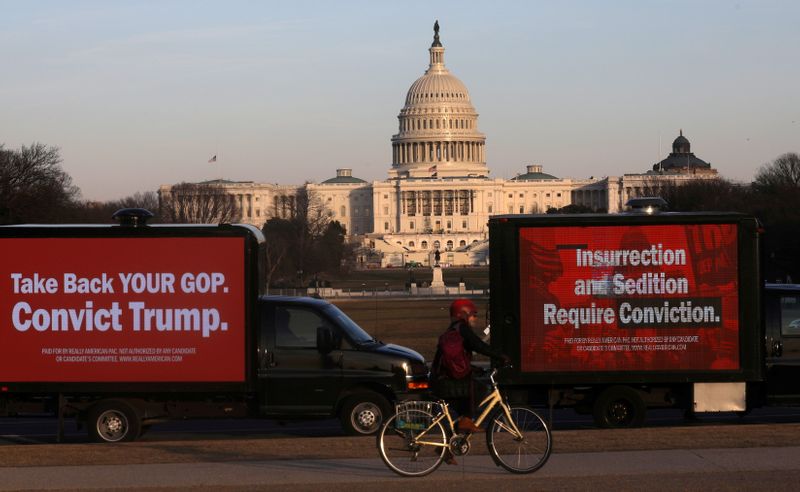 © Reuters. Trucks advertising in support of convicting former U.S President Donald Trump in his upcoming second impeachment trial are seen parked on the National Mall with the U.S. Capitol Building visible behind them in Washington

WASHINGTON (Reuters) – Donald Trump’s historic second impeachment trial, on a charge of inciting last month’s deadly storming of the U.S. Capitol, opens on Tuesday with a debate over the constitutionality of trying a president after he has left office.

Hundreds of Trump supporters stormed the Capitol on Jan. 6 after a fiery speech in which the then president repeated his false claims that his Nov. 3 election defeat was the result of widespread fraud and urging them to “fight like hell (or) you’re not going to have a country anymore.”

The Senate trial follows only the fourth impeachment of a president in U.S. history. But it is unlike all others in that Trump is the only president to have been impeached twice by the House of Representatives. He is also the only ex-president to face a Senate trial.

The trial could provide clues on the direction of the Republican Party following Trump’s tumultuous presidency. Sharp (OTC:) divisions have emerged between Trump loyalists and those hoping to move the party in a new direction.

Trump’s lawyers plan to open the trial on Tuesday by questioning whether the U.S. Constitution allows the Senate to hold an impeachment trial for a president after he has left office.

Most Senate Republicans have embraced that argument, which strongly suggests that Democrats will be unable to garner the two-thirds majority needed to convict in the 100-member Senate. Democrats and many legal scholars reject the Republicans’ constitutional interpretation.

Senate Democrats are expected to prevail in Tuesday’s vote on the constitutionality of the trial. An effort to block the trial on those grounds was defeated 55-45 last month.

A prominent U.S. impeachment expert cited by Trump’s lawyers in a brief advancing their argument accused the team on Monday of distorting his work “quite badly.”

A group of nine House Democratic impeachment managers will prosecute the case. They have accused Trump of betraying the country and the Constitution by fomenting acts of violence after falsely claiming the presidential election had been “stolen” from him by vote fraud.

“The House did not impeach President Trump because he expressed an unpopular political opinion,” House managers wrote earlier this month. “It impeached him because he willfully incited violent insurrection against the government.”

During the trial, they will argue that in working to overturn his election loss, Trump emboldened a mob to break through Capitol security to stop congressional certification of Democrat Biden’s victory.

The House Democrats prosecuting the case face a high bar, needing the votes of at least 17 Republicans as well as all 48 Democrats and the two independents who caucus with them to secure a conviction.

On Wednesday, the prosecution and defense will turn to the merits of the charge. They have a total of 32 hours evenly divided over no more than four days to present their cases.

The arguments would begin midday on Wednesday. The proceedings could be extended further as senators would have time to question both sides.

If House managers want to call witnesses or subpoena documents, the Senate would have to vote to allow those. Trump lawyers and House managers could question witnesses – a far more exhaustive procedure than Trump’s first impeachment trial, which had no witness testimony.

Trump’s defense is also anchored in the argument that he was exercising his right to free speech in urging backers to “fight” to overturn the election result.

His lawyers said in a pretrial document that Trump was speaking in a “figurative sense,” adding: “Notably absent from his speech was any reference to or encouragement of an insurrection, a riot, criminal action, or any acts of physical violence whatsoever.”

One year ago, the then Republican-controlled Senate acquitted Trump on charges of obstructing Congress and abuse of power related to his pressure on the president of Ukraine to launch an investigation into Biden and his son Hunter in 2019.

The Democratic-controlled House said Trump withheld vital military aide for Ukraine as leverage to get an investigation that Trump hoped would politically wound Biden as he ran for the Democratic presidential nomination.

Trump dismissed the allegations as a “witch hunt” orchestrated by Democrats.

No House Republicans voted to impeach Trump in December 2019. In the Senate trial, just one Republican, Mitt Romney, voted to convict Trump on one of the charges.

This time around, Trump lawyers are calling the proceeding a “brazen political act” by Democrats.

But 10 House Republicans, including Representative Liz Cheney, a member of the Republican leadership, voted for impeachment last month.