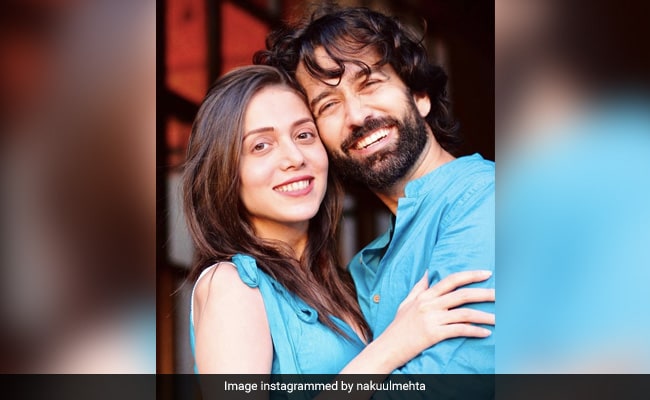 TV actor Nakuul Mehta and his wife Jankee Parekh are now proud parents to a baby boy. The couple, who welcomed their little bundle of joy on February 3, announced the new addition to their family on Saturday. The actor posted a photo of their baby’s hand and wrote: “February 3, 2021. This is us. Grateful and sleepy in equal measure. *Ing: Jankee and Him.” Nakuul’s friends and colleagues from television industry such as Aamir Ali, Disha Parmar, Niti Taylor, Drashti Dhami, Gautam Rode, Hina Khan, Kritika Kamra, Sampada Vaze, Amol Parashar, Namita Dubey, Rithvik and Mansi Srivastava dropped congratulatory messages for the baby in the comments section of his post.

Nakuul Mehta and Jankee Parekh, who got married in 2012, announced their pregnancy with adorable posts on social media. They shared a video montage of their journey as a couple, starting from being best friends to parents-to-be and wrote: “Best friend < Girl-friend < Missus < This. Circle of life and then some more. We are expanding.”

And since then, the actor has been sharing beautiful pictures from their photoshoots.

The couple often share glimpses of their fun-filled quality time. Take an example of their “Indian ‘IDLE’ Pool Edition.”

And also fun on the beach:

Nakuul Mehta is best known for his roles in Ishqbaaaz and Dil Boley Oberoi. He made his debut in television with the show Pyaar Ka Dard Hai Meetha Meetha Pyaara Pyaara. He’s also featured in web-shows such as Never Kiss Your Best Friend and Bae Control.

Around 4000 Covid19 Variants Exist In The World