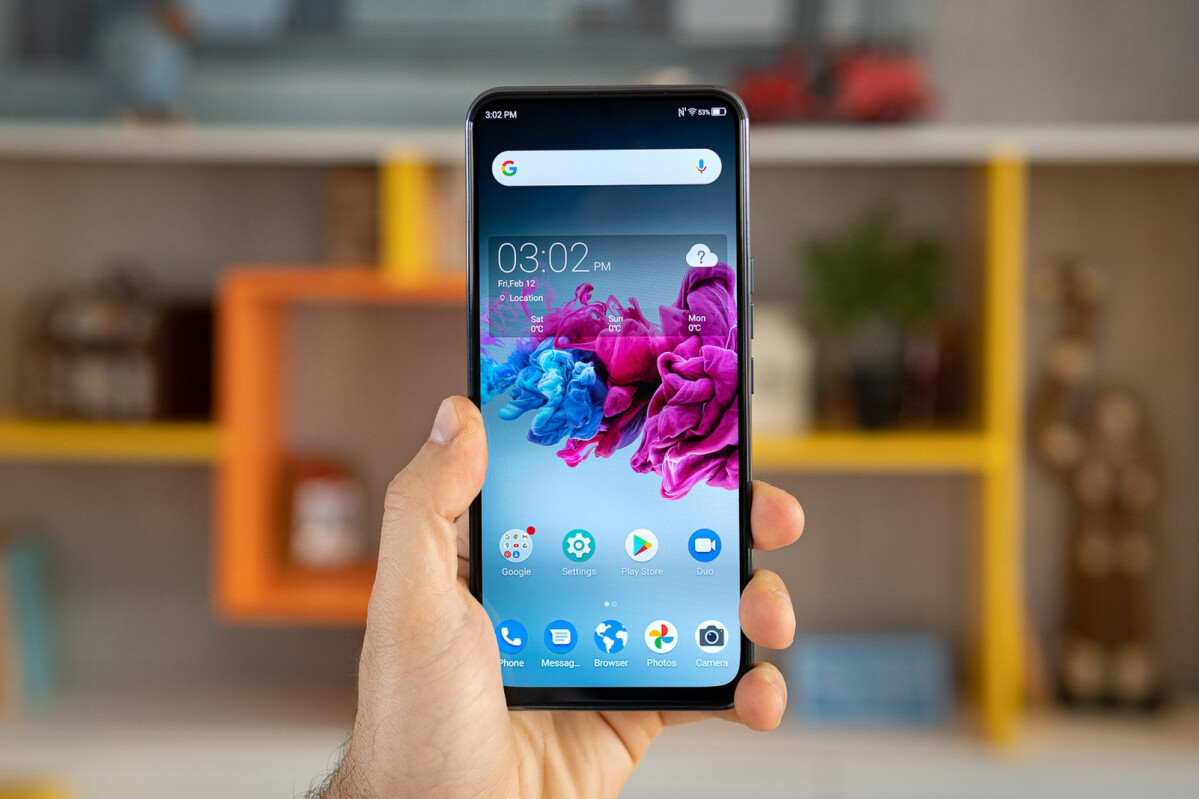 At first glance, the ZTE Axon 20 5G could pass as a standard, modern smartphone. It’s thin, light, with rounded corners and quad cameras on the back. Like most Android mid-rangers and flagships, the phone has minimal bezels, with only the “chin” being mildly larger than the rest. It’s all very traditional for a phone that came out in late 2020.But on close inspection, you may be surprised to find that the ZTE Axon 20’s display is entirely uninterrupted by hole-punch selfie cameras or notches of any kind.

This would be a fun, if not an eerie question to ask once the technology is perfected. But as it stands, the ZTE Axon 20 5G is just the first step towards a future of phones with “invisible” selfie cameras, so the illusion here only works perfectly with dark wallpapers and apps in Dark mode.As soon as you start browsing white webpages or using apps with bright primary colors, you’ll notice that there’s a strange black square at the top of the display, where a hole-punch selfie camera would normally be. That square is actually an area of larger pixels that allow the camera underneath them to see through. It’s a very first-gen solution.

Due to the much larger size of those pixels, the area they cover doesn’t quite match the rest of the screen is terms of color reproduction either. Generally, not too pretty to look at.

On the flip side, as soon as you enable Dark mode and all of your apps turn black (or grey), and you also pick a darker wallpaper – the illusion works! The selfie camera disappears convincingly and you may even forget that it’s there until the next time you actually need it.

Only when watching YouTube videos or movies, you’ll likely get a reminder about the aforementioned square of large pixels, but generally, it’s not much of an eyesore in Dark mode.

Although visible in photos like this one, the square above the camera is hard to notice with the naked eye on this wallpaper

Does face recognition work with an under-display camera?

Face recognition works surprisingly fast and well on the ZTE Axon 20 5G, although it’s important to remember that this is the less secure type of face recognition, which only relies on a single selfie camera. It works well even in poor lighting conditions, but can theoretically be tricked by someone who looks like you. So it’s best to stick to the fingerprint sensor for authentication.

But just in case you were curious – face unlock does work with this under-display selfie camera just as well as on any other phone or tablet that supports this feature.

How do selfies look when taken with an under-display camera?

Photos from the Axon 20’s under-display camera come out okay, albeit a bit soft around the edges. Even in good lighting conditions, the camera quality doesn’t quite match the average mid-range phone that has a normal camera.

Faces always seem to come out a bit soft, even when you disable the skin-smoothing effects that are enabled by default, as is the case with many Chinese phones. Aside from normal selfies, you can take Portrait selfies and make video recordings with the under-display camera. And for those you can expect the same camera performance.

As a first-gen under-display camera, I suppose we can’t expect miracles, but considering that this is a $449 phone, most consumers would likely have higher expectations than this.

Judging by the results from this camera, we can see why other manufacturers, like Samsung, might be taking their time with embracing under-display camera technology. It’s arguably not good enough yet for the general consumer.

Phone selfie cameras have evolved quite a bit in recent years

Most of us remember when notches first became the hot new trend (I’ll never forget the Pixel 3 XL notch). Then followed a number of phones with motorized pop-up selfie cameras, until cutout (hole-punch) selfie cameras became the most widely-adopted standard for Android phones. And while Apple will stick with its signature notch even for its upcoming iPhone 13, Android phones are likely to move on to using under-display selfie cameras soon.

ZTE’s Axon 20 5G gets the crown for being the first commercially available smartphone with an under-screen camera, but we do know that Samsung is also working on under-display camera tech, and so are Xiaomi, Oppo, and others. It’s only a matter of time until we see this idea executed better.

But enough about the future, let’s not overlook the present. The ZTE Axon 20 5G already has both an under-display fingerprint sensor and an under-display selfie camera. Two things that phone manufacturers once had to make space for at the surface of a phone, now hidden under the display. The Axon 20 might not be a smartphone you should buy, but it’s impressive nonetheless, and gives us clear perspective on how fast mobile technology is evolving.