Hyderabad: To ensure accommodation and food for the homeless, the State government is constructing 22 permanent shelter homes in addition to the 34 existing facilities in different Urban Local Bodies (ULBs).

These shelter homes will be equipped with different essential services, including water supply, while sanitation, safety, and security are being given top priority.

The low-cost construction technology is being adopted to construct shelter homes, each covering an area of 3,600 sqft and costing about Rs 45 lakh. Each home will have two dormitories with one dining-cum-entertainment area.

Meanwhile, the MA&UD’s Mission for Elimination of Poverty in Municipal Areas (MEPMA) bagged the “Technology Sabha” Award under “Cloud” Category for “Tab-based GIS survey of the homeless in Urban Local Bodies of Telangana”.

Over 4,600 homeless people, including 3,523 men and 1,104 women, were identified during the survey. These include 502 differently-abled persons. This is a first-of-its-kind initiative taken up by the MEPMA for identifying the homeless in the ULBs. For the purpose, it initiated a survey using the best available technologies last year. 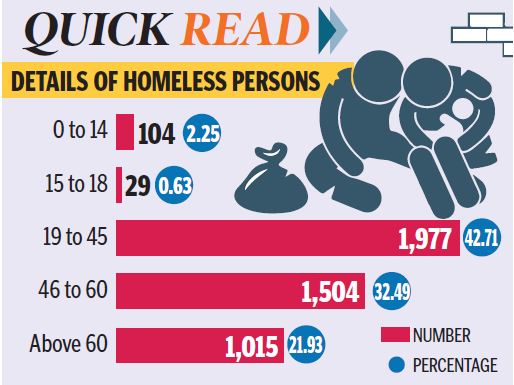 In consultation with line departments, the MEPMA has developed a questionnaire on the mobile app and using the GIS technology, every ULB is divided into zones. The teams set up as part of the survey spoke to each identified homeless person between 11 pm and 5 am. The photo of every identified person was captured and the location was geo-tagged to trace the places where there is a high concentration of the homeless in a particular town.

The Supreme Court Committee on Shelter for Urban Homeless and the Ministry of Housing and Urban Affairs were impressed with the survey taken up by the Telangana government and instructed other States to follow the exercise.

This has been an outstanding initiative, especially during the lockdown to identify the homeless and provide them with rehabilitation at shelter homes. Also based on the survey, the Mission Director, MEPMA, initiated the construction of new shelters on a mission mode.

The process followed in the State is now being adopted by Delhi, Maharashtra, Punjab, Jharkhand, Goa, Meghalaya, Arunachal Pradesh, Rajasthan, Tamil Nadu and others and are submitting reports to the Central government, said Commissioner and Director Municipal Administration N Satyanarayana.

Based on the survey, the MEPMA sanctioned 73 shelter homes across Telangana. Of these, 34 are already operational and the construction of the remaining homes is in progress, he said.